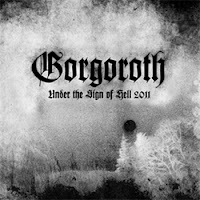 In a move guaranteed to segment whatever fan base was remaining from their last few bouts of drama, Gorgoroth has decided to follow up it's latest studio effort Quantos Possunt ad Satanitatem Trahunt with a re-recording of its 1997 classic, Under the Sign of Hell. Why this particular album was chosen, and not one of its cult classic predecessors Pentagram or Antichrist is beyond my ken. Infernus might have been unhappy with the production of the original, might have wanted to do this for fun, or both, but whatever the case be, you can be damned sure this will drag out all sort of fan entitlement response from the woodwork. How could you betray us? How are you not rich enough already with your fifty sports cars, Norwegian castle and estate, and a bakers' dozen super models slung from your arms, Infernus? I was going to name my firstborn after you! But I feel SO betrayed...

Oh wait, he probably has none of those things. So the claims of selling out grow rather tedious, rotted limbs sprung forth from a vocal minority who seem to think the universe revolves around them, and that these musicians don't have the legal right to do whatever the shit they want. But don't mistake me for some arduous supporter of this practice of remakes. I very, very rarely care for such modernizations of classic material, and in almost all cases I would prefer that the original version be experienced, since its dating and aural placement puts it in the proper chronological perspective for the newcomer to the band or genre. Occasionally, a band will put out a great collection of re-recordings that feel fresh and energetic without any diabolic intention to supplant the originals (Destruction and Satan's Host come to mind immediately). Or they might shit the bed entirely (for example, Bethlehem remaking S.U.I.Z.I.D. with weaker vocals), or not offer enough difference to matter.

So, any judgment upon this new rendition of Under the Sign of Hell must ultimately fall not only on a question of necessity, but on its actual quality. Do these songs sound better with a fresh coat of paint, or do they sound contrived and disposable? Unfortunately, I felt that this particular redux leans more towards the latter. Now, let me clarify: I understand completely that the drums on the original sound like someone slapping a paper bag repeatedly with a plastic fork. But despite this fact, there is a real vicious streak to that record which earned it's place in history, and it seems that the 2011 edition loses a lot of that earnest hostility with Tomas Asklund's new drumming. He's a talented skin basher who makes it all seem effortless, of that there is no question, but the fact remains is that Grim's ridiculous drums on the original are one of those little, unintentional nuances that create character...wherein this new mix sounds like...just about anyone else.

And it's not as if Gorgoroth was attempting to dance on any graves, here. They brought back the same vocalist (Pest) from the original, and he sounds a bit fuller than the old album, as if he were gargling the blood of a fresh kill on "Krig", where on the prior incarnation he was just rasping as if out in the cold midnight air. The guitars are pretty much the same, only they sound a lot more corpulent and lack the incendiary, amateur thrills of their origins. In general, this is a more bass heavy production that falls more in line with Quantos Possunt... or their other 21st century studio outings than the good old days, and if you're looking for a black metal album to 'thump' out of your car speakers in between binges of 50 Cent and L'il Wayne, then by all means, turn this mutha out. You'll probably appreciate its sturdier, modern fiber.

Now, this is the complete album being reworked, so it's not something like Burzum's latest From the Depths of Darkness compilation, in which he tossed a few useless ambient ditties on to a selection of tracks (from two albums) he wanted to re-issue with better ('different', really) production. Front to back, it's Under the Sign of Hell, refurbished like old furniture being sent to auction. So there's no real new sense of configuration whatsoever, only the actual tones and depth of sound have been altered here, perhaps a few subtler shifts. The problem is, well there is nothing being offered on this remake that, to me, justifies itself. I'm not about to accuse Infernus of being some moneygrubber trying to sell the discarded ass-fat of wealthy baby boomers back to its original owners as soap. But at the same time, there is nothing remotely interesting about this material in this new schema, and I see no reason to bother with it when the original is just that much more...charming...