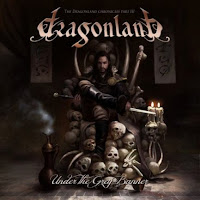 After a near decade of cosmic and astrological deviation, Sweden's Dragonforce return to their conceptual, epic fantasy roots with Under the Grey Banner, the thematic end to a trilogy that started with The Battle of the Ivory Plains (2001) and was continued on Holy War (2002) back when the band was signed to the defunct Black Lotus Records out of Greece. Now, I'm not going to lie, I've never had much interest in the sagas being told on such albums. As someone who reads a great deal of the fiction, keeping current on scores of authors each year, I find that a lot of these European acts (or artisans of fantasy themed metal in general) to be little more than shallow knockoffs of popular, dated works like Tolkien, Moorcock, Terry Brooks, Raymond Feist, and other RPG influenced properties like the Dragonlance setting or Baldur's Gate PC games.

Not that these are bad sources to draw inspiration from, but unlike a Summoning or Blind Guardian, who have managed to pay great tributes to Tolkien, a lot of these concepts created by bands like Rhapsody or Dragonland are laughable at best. Mirroring what I said in my recent review of Iron Savior's The Landing about sci-fi, this literary genre has come a long way since the domination of predictable, sword & sorcery, Dark Lord and Chosen One syndromes, but you don't see a hell of a lot of bands dabbling into the gritty political fantasy of a George R.R. Martin and Joe Abercrombie, or the weirder, darker and innovative spaces developed by authors like a Steven Erikson or China Miéville. It's a pity, really, because fantasy is such a broad place to find one's muse and metal seems such a great outlet. Granted, I got a kick out of, say, the first two Rhapsody discs despite themselves (stupid fun), and have more or less enjoyed every Dragonland disc to date (including the more proggy ones), but there were moments on this latest album where the narrative intrusions felt tragically lame.

Of course, this is a crack team of musicians here, and wherever the music shines, it shines as brightly as the celestial objects that influenced their last effort (Astronomy). So these few brief interruptions can at least be overlooked. "Ilmarion" opens the festivities, a pompous orchestral intro that would not seem out of place as a fantasy RPG intro on the Playstation 3 or as part of some theatrical escape into a popular literary realm. Then "Shadow of the Mithril Mountains" arrives with the corny female narrator and explodes into some well crafted, anthemic power metal that clearly shows its roots in bands like Helloween, Labyrinth, Rhapsody and Nocturnal Rites, in particular that phase of the later 90s when it seemed every Italian, Swedish and German power metal band with a keyboard or competent vocalist was being signed up in a frenzy until the industry arrived at Dragonforce.

But credit where credit is due. Dragonland has a real knack for jubilant, soaring chorus sequences, complex arrangements loaded with flashy, brief and exciting leads and muted melodic bravado redolent of Gamma Ray and their ilk. The lyrics are all generic tripe revolving along some schlock fantastic saga (as I spoke of earlier), but despite them it's hard to not want to roll up some LARP character and run around with a foam sword to the momentum of "Fire and Brimstone" or the pure Euro-anthem "The Black Mare". They can mix it up for some cleaner guitars ("Lady of Goldenwood") or concoct an 8 minute epic ("Under the Grey Banner" itself) without much difficulty, and while there are no real hooks on this album which I can envision myself singing in 15-20 years like an "I Want Out", "Port Royal" or "Send Me a Sign", the Swedes offer enough dynamics and vibrant energy throughout this album to thrill purists who are not yet jaded with the genre. Not a 'great' album by any stretch of the imagination, and not as interesting as its predecessor, but firmly and lovingly executed.