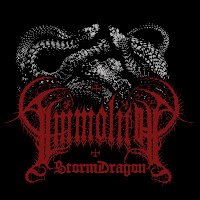 The frustrating thing about an album like StormDragon is that while the band brings absolutely nothing novel or interesting to the table, neither do they really do anything wrong. In fact, it's not often you hear a US outfit with such a solid aesthetic correspondence to the Norse and Swedish rush of mid-90s black metal, and Immolith do not dishonor this tradition by scrawling out mindless cycles of lame repetition, instead forging riffs that exhibit some degree of foresight. StormDragon might be a little too blast-heavy in places, a trait tracing back to bands like Marduk or Dark Funeral, but really, any album with a song named after an obscure 1st edition AD&D adventure module deserves some further scrutiny.

That song would be "The Ghost Tower of Inverness", and it bears mentioning because it's one of the better balanced on the entirety of the album. Slower, doom-like passages lapse into searing tremolo riffing and back again, while vocalist Isiamon spits vitriol in the form of a percussive, echoing rasp, and at its climax the band lurches into this taut death/thrashing riff which I almost wish they'd used more often. The first few tracks "Torch of Baphomet" and "Rites of the Blood Moon" are also appreciable, with solid tremolo picking patterns, intense drumming and a splash of sheer hatred from the vocals, like spurts of blood upon a well-honed, once shining blade. Fans of anything from Lord Belial to mid 90s Mayhem and Emperor will find some solace in the familiarity and precision of the songwriting, and unlike a lot of black metal front men out there, the vocals here are entertaining enough that they don't seem to grow tiring, even if doesn't always bark them out in an intriguing meter.

Of course, it's that same familiarity which also holds StormDragon back from achieving a greater impact, for its audience will likely have heard the same style and aggression countless times in the past, and Immolith are unable here to really trump their predecessors. The progressions of notes here are certainly decent, but they could always be better, and though the band does not always stick to the same tempo to the point of monotony, there are rarely any surprises lying in store throughout any of the tracks here. A few of these have been polished up from the band's 2009 EP, Hymns of the Countess, but I found the writing fairly consistent throughout, and the production here is about as good as you want it if you've got some built in nostalgia for the 90s works of Marduk, Dissection and so forth. Immolith does not sound like a product of New Jersey, but more of Scandinavia, and that's a compliment when gauging this style. Competent, blazing fast and burning bloodied with hatred, StormDragon exhibits a formidable level of raw ability, but I'd love to hear the band stretch and challenge itself more.