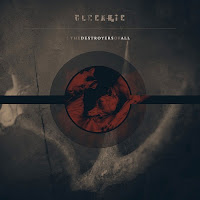 You know, in general I like to think of myself as a fair and balanced individual, open minded in his musical tastes. I consider it a blessing that I've been listening to metal music in all of its forms, from an age at which I was unable to even distinguish what those were. An age where really the only brand was 'heavy metal' itself. Come thrash, come speed, come power, come doom, come death, come black, come drone, come folk, come whatever, it's always been a pleasure to experience each new terrain as it took form, to separate the chaff from the wheat. But every so often, I find myself at odds with an album that appears like some new cultural monolith from the void, some tribally praised epiphany of the unsung, and this year out it would appear to be Ulcerate's third full-length The Destroyers of All.

I don't think there's a single hip rag out there which isn't lauding this as one of the year's best offerings on the extreme side of the spectrum, and I've seen it mentioned on years' end lists more numerous than I could count in a lifetime. New Zealand band finds a new direction, and impresses all with its absolution and artistry! Now, let's reverse for a moment: I actually quite like Ulcerate. Or rather, I enjoyed their first two first two albums to some extent. Everything in Fire, in particular, was an incendiary and turbulent blitz of harrowing architecture. Certainly even then you could tell that there was something mildly different about the way the band were building their compositions. Tense, jerking tremolo riffs supported by one of the more technically versed skin-hammers in the field (Jamie Saint Merat), and what it might have lacked in truly memorable note progressions it made up for in its sheer, explosive facade...

Here, they've basically watered down the formula, or rather pacified it to the degree that the music has become more accessible. That's not inherently a bad choice, knowing just how chaotic they had seemed up to its release, but somehow Ulcerate have managed to leech all that terror and tension out of their music. The influence of drone, post-hardcore and sludge have crept forth into the compositions, and thus this feels like a more excitable alternative to Neurosis or Isis with a drummer who can mete out more strikes per minute than those acts have on entire albums. The guitars center in on spikes or ringing, higher pitched droning notes that one would think might actually brighten up the beats, or add some warmth, and yet they're almost entirely without any value. Each note sequence feels pitifully simplistic and unmemorable, as if the two players were simply trying to zip and zag around one another with all the shiny strings and create some sort of aural sunstroke in the listener.

Quite annoying, and eventually The Destroyers of All grows as tired and boring as watching water drip from a slowly leaking faucet. The odd thing is, the musical meter is not monotonous on this album. The band will shift between slower passages like "Beneath" to more harried, manic double bass beats in "Cold Becoming", and certainly the notes continuously shift with each streaming imprint of irritation, but considering these tracks range from six to over 10 minutes long, there's a lot of headache lying in wait, and the guitars seem to pull the same tricks over and over again in this banal dearth of creativity. I picked up the album earlier in the year, listened through and found nothing even remotely as interesting as what people were raving about, and then put it away for some months. But time has not been kind, and I find myself just as irascible towards its content as I was back then. Hell, I can't even listen through this anymore without reading along to the lyrics, because in all honesty they're better than the music...

Admittedly, this is not the WORST record I've heard in a year choked with disappointments and overrated tripe, but I must say that in ratio to its surrounding miasma of hype, I reaped the least yield of enjoyment out of The Destroyers of All than almost any other of its kind. Compared to Flourishing's amazing debut album, or others in this class of hybridized post-hardcore and death metal, in flounders on such a flat and soulless plane that it's practically two dimensional. 53 minutes with not a single good riff to be shown for it, dull semi-guttural vocals that aren't nearly as interesting as the text they speak, and a jerky atmosphere as annoying as a cloud of flies at a picnic. God, I'll just recommend this to everyone I know. The Destroyers of All is not clever. It's not well written. It's not inventive in any meaningful sense of the word. The Kiwis of Ulcerate can certainly do better, and HAVE done better than this, but until such a time as they return to that point, I must remain humbly and respectfully undestroyed.