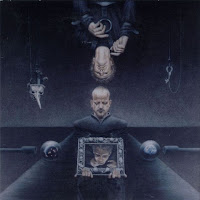 Considered by some to be the mellower, matured sibling of the 2000 album Mardraum, and others to be the most contentious effort in all of Enslaved's body of work, I feel that there is perhaps no more divisive a recording in all of this Norwegian band's history. Granted, a lot of the smack I've seen leveled at this record comes from crass and foolish misconceptions rooted in factual inaccuracies. Monumension sounds like Pink Floyd! Yes, to an extent it does. Monumension does not have 100% Viking metal riffing, and it sounds like a famous band, therefor it is weak and the band has sold out! Oh noes! What sort of ass backwards conclusions are these? In what alternate reality is 70s psychedelic rock 'mainstream' or sellout? Pink Floyd might push a lot of records, and fill a lot of stadiums, as they've had decades to build a career thanks to their (largely) wonderful music, but even by 2001, how many newer, psychedelic/prog rock bands with that same, dreary and spacious sound are tearing up the charts alongside the hip hop, R&B and pop-country flavors of the week? Not fucking many. In fact, I'm willing to bet: none.

So then, why the hostility if Enslaved should draw upon some influence from a legendary band whose star shone highest 20-30 years in the past? And not just legendary because they sat around with thumbs up their ass, but because they wrote important, thoughtful, original and conceptual music which tackled their own ids and the social construct at large. Monumension certainly channels the 60s and 70s into numerous dramatic pauses through its runtime, but any assertion that this music suffers due to some imaginary 'lack of metal' is downright false. A large chunk of this record is still quite heavy, and the remainder, in which Enslaved lets their collective imagination out to breathe, is almost without exception a captivating experience. I'm not claiming that Monumension is the band's masterwork, nor even one of the band's most coherent and consistent efforts, but it certainly should not be written off due to some delusional misrepresentation of its content. It's not as if Enslaved cornered the market on incorporating a Floyd-like dreamstate into metal music (listen to Tiamat's excellent 1997 effort A Deeper Kind of Slumber), but I think they've done quite well with such elements here.

Monumension is nowhere near so spastic and jarring as Mardraum, but once again we have a band here which has never had any real intention of aping itself too closely. I found that the mix of the album was pretty close, with a lot of grime attached to the heavier guitars, but there are some notable differences despite the consistent lineup. For one, Grutle's vocals have a more phlegm-choked sound during the rasped sequences, though they also integrate the death growls of the previous album ("Convoys to Nothingness"), and some psychedelic cleans as in "Hollow Inside". In addition, there's this wavering, creepy cleaner voice used almost like some decrepit narrative (again, "Hollow Inside"). The guitar lines feel far more focused than Mardraum, more intent on oppression than acrobatics, so the layered, slower tremolo picked lines in "Convoys..." or the Sabbath-born drudging doom of "The Cromlech Gate" and its excellent gutturals seem perfectly intense.

Judging from what I've already written, one can no doubt surmise that this is quite an eclectic piece of work, and in truth, it visits a great number of climes. No two songs here feel truly alike, yet as a whole it seems to flow effortlessly, not unlike The Sham Mirrors (Arcturus) or Sigh's wacked out Imaginary Sonicscape, both of which combine a wide breadth of sonic ingredients. Monumension ranges from dissonant psychedelic sludge ("Outro: Self-Zero") to old school black and death ("Enemy I", "Vision: Sphere of the Elements") to even a manly, percussive tribal gathering in their native tongue alongside Norse punk legend Trygve Mathiesen on the final track, "Sigmundskvadet". There are some straight blasted sequences in "Smirr" which should not alienate the band's black metal base, but I found that my favorite tracks here were those which traveled in broader strokes. In particular I love "The Voices", a pretty stolid blackened thrash piece with lots of wailing, ghostly melodies and an incredibly interesting, psychedelic death bridge.

Strangely enough, despite its staggering variation, Monumension never comes unglued at the seams. I don't enjoy every riff on the record ("The Sleep: Floating Diversity" is partially boring, for example), but regardless it was the most compelling Enslaved record to its day, second only to the mighty Frost, and well worth breaking out if you've got your copy around and never gave it the chance it deserved. Part of the sonic exploration here would be carried forth to the brilliant Below the Lights, but in general this was a one-time offering. The lyrics are further removed from the band's mythological foundations, but they are excellent nonetheless, and it's even got the first great cover art of their career (the others were too glaringly obvious or cheap). Really worth checking out, just approach it with open expectations, if not open arms.