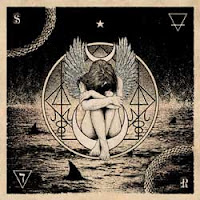 Few new artists have I heard in recent years with a configuration and concept quite so staggeringly beautiful as Salt Lake City's sludge angels SubRosa, and yet I feel that it's this very nature which often outpaces the band's ability to compose itself. Don't get me wrong: No Help for the Mighty Ones is a distinct, compelling album worth listening through whether you're a proponent for the doom, stoner and sludge genres or just someone seeking out crushing new sounds. But it's not some uniformly well written straw that broke the camel of quality's back, and it too often lulls into that age old mire of ennui that has plagued the niche for well over a decades as bands sacrifice strong structure for sheer heaviness and atmosphere.

In those two categories, SubRosa is a shoe-in for your attention. Dense, copious guitar tone drones on in simplistic, familiar patterns while airy, female vocals stretch across the surface of the tribal drumming and desolate glaze of the violins and sampled instruments. The opener "Borrowed Time Borrowed Eyes" is a joy to experience, a bastion of irreverent sadness that fully delivers on the quintet's unique promise. Catchy verses, catchy chorus, and a moderately cool bridge define what is clearly one of the best songs on the disc. But it's the longer pieces, like "Beneath the Crown" and "Stonecarver" where they start to slip. For instance, I don't really dig the harsher vocals where they are implemented. I realize the purpose, to create a whole 'beauty and the beast' contrast like so many Gothic/doom metal bands have done in the past, but I feel like the idea of the cleaner female vocals is strong and numbing enough that these are just not necessary.

Also, bigger does not always equate to 'better', so these fatter tracks bear the brunt of the album filler, or the riffs that don't quite affix themselves so lavishly to the vocal lines. For example, some of the guitar parts in "Attack on Golden Mountain" are just downright boring. If not for the atmospherics, and the collision of clean and harsh vocals, it'd be a truly monotonous slog. Much better are tunes like "Whippoorwill" with its drowning, stoner overtones or "The Inheritance" with its marriage of violins and wah-wah. The closer "Dark Country" is also quite essential and busier with guitars cycling in an almost bludgeoning, progressive fashion. But sadly, despite the strength of much of the material, there are a few gaping holes where it just doesn't work as well as I'd like it to. Also, the vocal-only traditional harmony piece "House Carpenter" is forgettable.

If No Help for the Mighty Ones had been condensed to just a few of the songs, perhaps as an EP with "Borrowed Time, Borrowed Eyes" and a handful of the others, it would have been one of the most revelatory experiences I had this year, but there's just not enough of the good stuff here to pass around the whole campfire. Two of the songs are culled from the Swans Trapped in Ice EP a few years back, and of these I would have left at least "Attack on Golden Mountain" off and replaced it with something shorter and better, then maybe trimmed down "Stonecarver" and left off the "House Carpenter" piece. As it stands, there's still enough here to recommend towards any prelate or adept of psychedelic hippie doom, especially if you're into other female fronted acts like Blood Ceremony, Jex Thoth or the new album from The Wounded Kings.