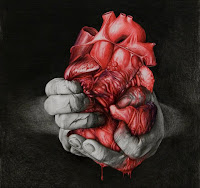 Blood Mortized is another Swedish band pursuing the dream of its forebears from the 90s, and I'd be lying if I didn't admit that the Bestial EP feels like being dropped off in a time machine somewhere betwixt Clandestine and Wolverine Path. However, the skill of the band's roster, several of whom have served time in acts like Amon Amarth and Crypt of Kerberos, certainly shines forth, and the material is well-produced and mildly entertaining, even if it fails to stick to the memory like others in this peer group (for example, the full-length debuts by Miasmal, Feral and Morbus Chron).

Of course, you can largely gather what this sounds like from the first sentence of the review. But to give them some credit, there are mild deviations into other old school terrains, so whilst "Bestial" itself opens the album at a rocking canter with vocals eerily reminiscent of L-G Petrov, the second track "Of Dust & Doom" is a slog of doom which reminds me of Bolt Thrower's airy, windswept guitar tone from Realm of Chaos, set to a march and a mix of narrative vocals and grunts. "Shadows of the Quarter Sun" also gives this impression at first, but then picks back up into the Swedish turf. The closer, "Rekviem" is a slower, grooving piece, but cast in much the same riffing mold with some nice glazes of lead deep into the 6+ minute structure.

From the perspective of pure production, Bestial sounds great, and should absolutely thrill fans of that old Sunlight sound on tone alone. Unfortunately, the band's riffs just never seemed to scream at me. Albums like Clandestine or Indecent & Obscene weren't just getting by on the bludgeoning volume of their guitars, but the actual songwriting, and I just don't feel as if Blood Mortized have the capability or presence to amount to anything more than the next guys on the same block. At least not with this material. Bestial is fine for listening through once or twice, and some headbanging might even ensue, yet there's nothing surprising or unique about it, and it's been done so, so many times before, and better. Even in recent memory I can count off a dozen albums that destroy this at it's own game, too many other places to turn for this fix.