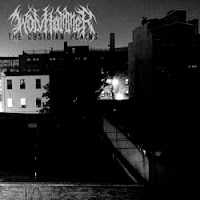 An album like The Obsidian Plains always throws me for a loop, for while I didn't get a wealth of enjoyment from the music itself, I have a very healthy respect for what the band is doing. Wolvhammer is a Minnesota quartet which ably proves that blackened sludge need not be some wholly tortured, sluggish mess that forces a listener to mercilessly snort laced cocaine while tearing out his/her own ears and eyeballs. Granted, that's precisely what some adherents to the genre desire to experience, and thus we have acts like Eyehategod and Ramesses to dispose of them, but Wolvhammer is far more forward in incorporating its punk and hardcore influences, and in asserting a genuine, brighter sense of melody into the fury of their desolate existence.

In short: variation. If you've no interest in this genre outside of slovenly, spirit sucking noise, then The Obsidian Plains might not be the album you're looking for. It's slightly better produced and less impenetrable than last year's debut Black Marketeers of World War III, but they still incorporate a solid range of tempos into the track list that hold the listener's attention far more than some 45 minute harrowing stoner crawl might. "The Gleaming" morphs from wide open, muddy melodic sludge to punk-injected raw black metal and then into a moderately thrashing breakdown while the highly distorted bass glues it all into a singular, sobering expression. That said, I was more the into songs with fattened grooves that channeled a bit of Hellhammer like "Bones of the Pious" with its tremolo black breaks or "A Defiled Aesthetic" which alternates a Scandinavian dissonance with seething hardcore anger. "Shadowhorn" is perhaps the darkest and most memorable of these cuts, with mesmeric clean chanting cast like a shadow beneath the churning propulsion, and I also liked some of the warmer, melodic sludge in "The Sentinels".

Unfortunately, even the best written songs on this sophomore suffer from a bit of filler, and one could probably count the truly engaging guitar riffs on one hand. Left or right, your choice. The black, spacious vocals of Adam Clemans have a grisly sneer to them which sounds more than adequate to the mix and material, yet there's nothing particularly catchy about his phrasing or intonation which would drive you bonkers like Eyehategod or Iron Monkey used to do. The guitars, or at least the rhythms are very often predictable and familiar feeling, and I wish they'd made more use of the feedback and noise that permeates "Ghosts in the Water", because that actually added breadth to what otherwise follows a fairly obvious path. The Obsidian Plains is a loud and heavy record, but not heavy in terms of menace or vitriol, just the volume, so I'd like to hear some more wicked sounding note progressions mixed in with the more consonant choices.

Overall, Wolvhammer manifests the impression here of emerging from some third shift stint at a meat packing facility in the winter, red and tired eyes thrust out into the sun and in desperate need of coffee. Enormous sounding, but more blunt and spacious than abrasive. I admire them for crafting music that's a little harder to pin down in terms of its precise classification, but not all of the tunes here are created equal and too few of them really endure in the memory, nor does the work as a whole. Wanted to like this a bit more than I actually did.