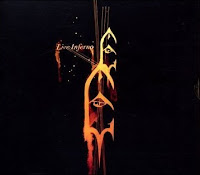 So, you say Emperial Live Ceremony was not enough to sate your urge for preservation of Emperor on the stage, and/or you were not able to attend their 2006 gigs at European festivals. This double-live album has you in its sites, and consider yourself shot. Live Inferno and Live at Wacken Open Air 2006 are both solid performances, but I might not be alone in questioning why the need for them to be packaged together. I mean, I LIKE that you're getting a lot more for your dollar...Disc 1 is 80 minutes and Disc 2 is 70 more minutes, but unfortunately the track listings are pretty much identical...

The Inferno festival is in Emperor's home terrain, so it makes a lot of sense that this would be the longer of the two sets, and truly this is loaded. In fact, this disc alone is better than either Emperial Live Ceremony (2000) or the Wacken disc included, and it features a more copious production that seems to better capture the atmosphere and surge of the audience. The keys are good and loud, without drowning out the guitars, and there's more of a low end. Surprisingly, despite their absence on the scene for years, the band does not seem to have let their limbs atrophy, and the guitar tones are rich and acrobatic. I don't think Ihsahn's voice here is quite up to its former state, honestly, but neither is it bad. Most importantly, this set has more tracks off In the Nightside Eclipse, and that fact thrills me. You get "Cosmic Keys to My Creations & Times", "Inno A Satana", "I Am the Black Wizards", "Towards the Pantheon" AND "The Majesty of the Nightsky", all of which sound phenomenal here, even managing to capture that rush of arrogant, nocturnal atmosphere found on the studio effort.

For newer fare, the albums are still well-represented. "The Loss and Curse of Reverence", "With Strength I Burn", "Ye Entracemperium" and "Thus Spake the Nightspirit" are all included from Anthems to the Welkin at Dusk; "Curse You All Men!", and "An Elegy of Icaros" from the IX: Equilibrium album. More of a thrill is that they included "In the Wordless Chamber" from their last studio effort Prometheus, which happens to be my favorite track on that album, and the horn strikes sound great, if a little soft. They've also got "Opus a Satana" from the Reverence EP used as an outro, which serves almost like a 'curtain' falling on their career, plus a medley of other material ("Infinity Burning") and a truly old school nod in "Wrath of the Tyrant". No real complaints at all here, they included most of the songs they should have on some live career retrospective and I'm sure the fans were blowing juices all over one another in excitement.

As for the Wacken (Germany) performance, it's somewhat shorter by 10 minutes, and the production and sound are comparable, with even more of an ambiance from the crowd rush. Unfortunately, the track selection here is identical to the Norse fest, sans the "Opus a Satana" outro, "Wrath of the Tyrant" and "Ye Entrancemperium", so this is simply not the favored of the two discs. It's this redundancy that somewhat hinders the value of this release, or at least in its audio-only format. It would have been truly epic had they varied up the track selection and given us even more impetus to purchase it, but that second disc drags its feet since it's not a better show than the first. Live Inferno alone is probably justification enough to own this if you're a diehard follower of the band, but as a product it could have been better. Then again, who knows if it was planned like this originally. The band probably just wanted to put their best feet forward at the gigs, and not worry about how the album would turn out.