Gehenna - Seen Through the Veils of Darkness: The Second Spell (1995) 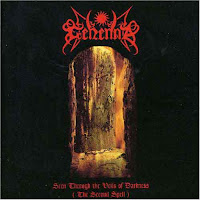 From the initial rush of "Lord of Flies", Gehenna seems almost a new band, for in this brief passage the band are firing up the engines far beyond the plodding pace of their EPs. That said, this opening burst of energy is not necessarily representative of their first proper full-length, which soon returns to the moderate gait of keyboard saturated, thick chords and wide snarling. Seen Through the Veils of Darkness (The Second Spell) does balance itself out a lot better than the previous recordings, and in terms of production and composure it was their best album to date, and one of their best still, but for me it still seemed rather second rate by comparison to many of the other Norse bands whose sounds were far more aggressive or inspired.

They play it quite safe through the opening tracks, and one of the problems with this is that the guitars usually serves as nothing more than a given lead weight to support the melodies of the keyboards, like the glorious shanty-like passage that dominates "Shairak Rinnummh". There are riffs aplenty down their, but nothing at all extraordinary, mere floes of easily predicted chords that play second fiddle to the atmosphere created through the raucous distortion and rasping. That's not to say that they're bad songs, because the keyboard crossbred with the rhythm is generally enough to evoke a spooky, cryptic mood, but on something like Emperor's In the Nightside Eclipse you've got both this symphonic architecture and blazing guitars to match. The album does improve in this manner the deeper one gets: "Vinterriket" and "The Eyes of the Sun" both have moderately more interesting axes that carry their own weight, and perhaps the rock-like notes in the longer track " A Myth", but for the majority of the album the playing does not distinguish itself beyond the cloying, distorted dirt of its tone.

Fortunately, those keyboards are often eerie enough that the album succeeds despite itself, and the storm-like drumming of Dirge Rep and the vocals of Dolgar and Sanrabb keep the ear affixed to the onslaught dichotomy of atmosphere and hostility. The production of The Second Spell is rich, flustered and oblique, comparable to Emperor or Dimmu Borgir at the time, but the songwriting would probably be better considered a 'poor man's' version of those artists, as it is rather simplistic next to a Stormblåst and the songs are never quite so catchy. There is some dynamic variation present, from the slower paced piano-driven piece "Dark Poems Author" to the rolling thunder of "The Mystical Play of Shadows", but little by way of sophistication. The ensuing album, Malice, far surpassed this one in terms of its creativity, but if there's one thing I can say fully in favor of The Second Spell is that it strangely does not sound a day older than when it first arrived. It's that nostalgic wish fulfillment which allows it to persevere as a minor cult classic, and fans of similar sounds on the first two Ragnarok albums, or perhaps Enthrone Darkness Triumphant and In the Nightside Eclipse will best appreciate it today.