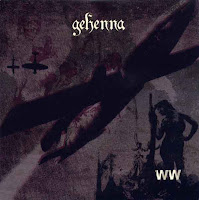 I can't have been the only person dissatisfied with Gehenna's turn of the century effort Murder. A half-decade brushed on by before they would once again venture into the studio, and the resultant sound and style of 2005's WW seem almost as if the band has taken a 180 back to their roots. Or rather, a step back towards what they were doing with Adimiron Black, sans the keyboards. I won't dispute that this was a good move, since the 90s thrashing/groove elements found on Murder were not exactly appealing, but sadly Gehenna would make few strides at all with their 5th album, and WW is a nearly complete void of distinguishable characteristics, as straight as black metal gets but with few of the ghastly, memorable aesthetics that catapult such albums into underground legends.

This is a competent album, by which I mean the execution of the instruments is as taut as one would expect from decade plus veterans of the genre, and they have ensured that it hits hard by hiring on Frost (Satyricon) to cover the studio drumming. Still, aside from the guy's callous and machine-like precision, there is nothing so incendiary or standout about his performance. The guy can blast and double bass the listener under the rug, but with such a mute palette of tried and derivative riffing, there's not much he might have done to improve the album's sense of sheer banality. Songs like "New Blood", "Grenade Prayer" and "Abattoir" engage in cyclic and circular riffing sequences that, while spinning a dissonant thread consistent with a decade or so of similar, Norwegian output, go nowhere and bounce of the listeners' skulls like Nerf projectiles.

There is some degree of variation in the actual songs, for instance the slower finale "Pallbearer" or "Flames of the Pit" at least offers a contrast to the thundering "Silence the Earth" or "Death to Them All", but the entire 37 minute experience seems all too flat and forgettable. The production creates a dark, forceful broth redolent of many Swedish and Norse records of the mid through late 90s, including Gehenna's older albums, but it's simply not enough to drag the songwriting across the finish line, and frankly, for all its flaws, Murder had more punch to its studio tenacity. That being said, WW is by no means an awful record, or even a particularly bad one. It straddles the average means of its genre and never seek to deviate, a guitar driven passage to nowhere, with fewer impressive riffs than one might count on the fingers of one hand, after having a few sliced off by the local organized crime syndicate. Hell, even the lyrics to tunes like "Death to Them All" are worse than even the previous few albums. WW might slightly edge out its direct predecessor in terms of overall finesse, but it's nothing that hasn't been performed hundreds of times, better.

Verdict: Indifference [6/10] (nothing is ever quiet here)