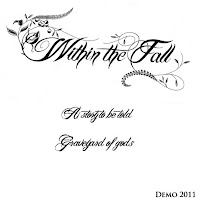 Within the Fall is a young act out of Sweden who exhibit an enormous adoration for the emergent death/doom sounds that were prevalent in England during the early to mid 90s. Within but a few minutes, I was already confronted with some blazing, Paradise Lost-like combinations of chord and melody that brought me back to the Icon or Draconian Times era, not something I would ever have a problem with, and not the only weapon at this band's disposal. They also tend to incorporate some drier, clean guitar sequences that create a contrast to the slow explosions of misery, and the vocals stick exclusively to the expansive, guttural drawl that once defined bands like Anathema or Paradise Lost before they made their stylistic departures, or perhaps a dash of mid-90s Amorphis.

I think they pull it off rather well, though I was somewhat apprehensive when the first (title) track turned out to be about 10 minutes in length. I can't claim that the band's acoustic plucking is all that catchy, but they affix it with some percussion, brooding whispers or simple leads to keep the momentum pushing forward through all the rise and collapse of the transitions. And when the massive chugging arrives beneath Joakim Rudemyr's growling, and the woeful lyrics, you can certainly feel that same, haunting weight that you might have once experienced with the band's influences. "Graveyard of Gods", the second, final and shorter songs was definitely the better of the two here, as it lacked any of the excess fat of its predecessor and the clean guitars, while predictable, were more emotionally resonant, the bridge rhythm elevating and potent, and the tear stained melodies that arrive in the conclusion certainly accessible and fit for melancholic consumption.

For a first demo, the production is quite clear, with the vocals placed front and center but never to the expense of the chugging or calmer tones. The bass and drums are there, but as usual in this sort of hybrid those are not the foremost concerns; as long as they keep the beat and create a broader space for the dreary melodies and crushing gutturals, they are functioning as intended. Probably my biggest concern with this demo would be the pacing. It's death/doom, and therefor expected to be slow, but the way both of the songs continuously cycle through the clean and heavy sequences does border on redundant. Better if "Graveyard of Gods" had been up front, and then perhaps a different song to enforce it, with a more steady heaviness, or even a slight increase in speed. That said, it's not as if either of these was poorly written or executed. They establish the parameters of their emotional content, and never let the listener stray forth from their inherent sadness, and clearly there is some potential worth following that might one day lead the band into the ranks of acts like Isole or Swallow the Sun.