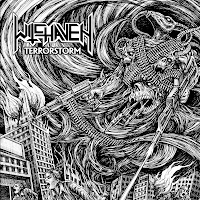 Another North American thrash hopeful to see a re-issue through MetalHit.com, Witchaven's Terrorstorm was self-released in 2010 to a fair degree of underground praise, enough that several indie imprints put it out in both vinyl and tape formats. Prior to that, they'd been kicking around demos for a few years and honing in on a style which flavors the formative Germanic black/thrash redolent of Kreator, Destruction and Sodom in the mid 80s, with perhaps a streak of older Bathory added for good measure. What I find most compelling about Witchaven, though, is that despite the antiquity or 'dating' of the music being performed, the lyrics and samples speak of a band who likes to keep its subject matter pretty current, so they'll engage topics of modern globalization, exploitation, meth addiction and other real topics that we, as a society, are actually facing today, rather than those big ticket issues of the 80s and the Cold War.

There are a few exceptions, like "Unholy Copulation" which is your usual Slayer blasphemy, "Ardent Lust" with its sexual overtones, or "Black Thrash Assault" which is frankly just a bit generic, but otherwise, it's a nice touch to know that someone is keeping tabs on the world rather than dissolving entirely intro retrospective aesthetics. I can't really say the same for much of the music, of course, but at least Witchaven perform their instruments with some earnest, volatile energy that faithfully mirrors their influences, whether it's the Slayer-like gunning in "A.D.D." and "Ardent Lust", the Bathory Blood Fire Death swagger of "Unholy Copulation" or the brutal Kreator blitz inherent to "Conflagration". Hell, they've even got a song here that feels more like straight up Bathory or Mayhem black metal ("Empty Chasm"), so while derivative, there is at least a fair dynamic range to pore over. The production itself is also solid, with a guitar tone that is both clean and raw, crisp and effective; and savage, hoarse rasping from Henry Montoya which sits at the precise right spot in the mix.

Where Terrorstorm seems to fall short of making a case for itself is in the various chorus parts, or when one breaks down a lot of the individual riffing. It's another one of those many albums which is predicated with little more than direct devotion to its early influences, and so the target audience will consist of fans who are happy with that primal black/thrash sound and desire no change or deviation from its original characteristics. Witchaven knows its business, and the lineup all seem to be sleek and competent performers, but aside from the lyrical material, they feel a lot like just another 'witch' band to follow the formula: Witchtrap, Witchburner, Bewitched and Witchery to name but a few. The guitars and vocals here are expletive and brazen enough that fans of the Nuclear War Now! or Hells Headbangers rosters might wish to give them a few spins, but ultimately I didn't find the songwriting to match up with other acts in the field like Norwegians Aura Noir or The Batallion. That said, I would not write off the potential here: it's a decent debut album, and one could do far worse.