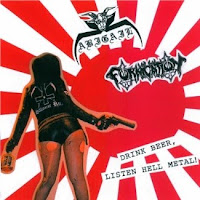 Of Engrish and the damage done! Drink Beer. Listen Hell Metal! is one of the latest in Abigail's nigh on endless parade of limited press split recordings, this time paired with the Canadian newcomers Fornication who appreciate a similar taste in sluts, blackened speed thrash and spent kidneys. As is usual with this sort of thing, the focus is strictly on the collector/consumer who views this band's output (and that of countrymen Sabbat, etc) as a paragon of rarity and long-term value. With just over 10 minutes of content, there's hardly even an impetus to break out the gramophone, but what the hell, right? Abigail and Fornication are cool bands, and whoever their cover model was this time out seems...rather agreeable.

You get two tracks by Abigail, one of which is a rehearsal recording of "I Am Holocaust" from their 2005 album Ultimate Unholy Death. Even in such a crude capture, I actually found that particular track more entertaining than either of the others on the split, with its burning and dirty speed metal aesthetics and Yasuyuki Suzuki's splattered vocals, but it's one that the Abigail fan will have already known and in no way better than the finalized studio alternative. Their new contribution, "Nocturnal War" takes more of a straight black metal approach with a lot of tremolo/blasting, and until the thick, distorted bass ruptures of the Hellhammer inspired bridge and the wild, rocking lead I admit that I was mildly bored with it. Fornication's anthem "Fornicator" is a predictable, messy but fun hybrid of speed/punk metal with black rasped vox that accelerates into blasting territory before the verse, with a thrash bridge breakdown, but the riff didn't really catch me, and the production was mediocre raw.

At any rate, these two bands are a good match for one another stylistically, I just wish they had brought more of their 'A' game and perhaps given us 6-8 songs of better quality. As it stands, I could not muster any real enthusiasm for this split outside of the smutty, sexy cover and another in Abigail's canon of smile inducing titles. Both bands are fun, but I'd urge you to check out their better studio works, like Abigail's Forever Street Metal Bitch or Sweet Baby Metal Slut, or that compilation of demos that Fornication released last year. This split itself serves as little more than an obscurity for the collectors to pin onto their collection like butterfly wings. But, hey, tracking down a copy might afford the bands a pack of smokes.