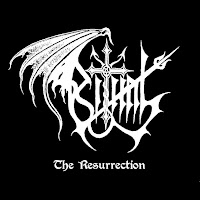 Ritual are one of the earlier known black metal acts to hail from the west coast of the US, who had a string of recordings released through the infamous Wild Rags imprint. Meaning, of course, that some will venerate them as hallowed collectors' items while others view them as utter trite. The label had a pretty random, if well-meaning taste in artists. Now, Ritual was never to my knowledge one of the worse bands on that roster, and their debut The Summoning was a decent, if somewhat lackluster debut in a straight black mold with rasped vocals, sort of boring blast beats and synthesizers. The ensuing efforts would broaden their sound, for example I seem to recall Soldier's Under Satan's Command was more of a thrasher, and that was their last album...in 1998.

We're not talking Von ancient, of course, so by the time this band go around to releasing their earlier work, the European scene had already exploded and there were a number of American bands like Absu nipping at their heels. It was very easily to lose Ritual in the shuffle, for even though they would constantly reinvent themselves through the 90s, the music produced was never all that great and thus an album like Demonic Winter Ritual was understandably shoved under the rug. With The Resurrection, the first new studio full-length over a wide gulf of years, the Californians returning to some of the passion and atmosphere. I notice a lot of their earlier melancholy ingrained into these tunes, and so it seems like the logical successor to the debut, ignoring the albums that were released in the interim. It doesn't look like much on the cover, and I'm frankly tired of these minimal approaches to artwork which look more like demos, but even I have to admit that Ritual has one of the best looking band logos I've ever seen, and the intent here is to let the music speak for itself, without any visual imagery needed.

And it does speak, tearing and scratching at the listeners' heartstrings with the incredibly harsh, tortured vocals of Ian Fleming (no, not THAT Ian Fleming). For you see, while the band is like to consider this the spiritual successor to their debut, there has once again been a transformation, and the sound Ritual produces here is sort of a half-way point between black metal and doom, or rather moody, driving, melancholic rock riffs. Tunes like "The Resurrection" and "A Perfect Moonlit Night" are quite happy to strut out some simple chord patterns and glaze them in the sort of melodies you're more apt to hear in folk, black and pagan variants rather than an old guard like this one. Know what, though? It functions well enough. The contrast of Fleming's rasp and the consonant, structured thunder of "Drowning Into the Sea" or "Winter of My Discontent" are strangely accessible but bitter harsh all the same. The band has also seen fit to also involve some variation, like the pretty straight melodic death shots of "Temples of Baphomet's Sons" or the ambient/cadence outro "March of the Damned", or the more straight rush of punk-fueled black metal in "Executioner of the Elder Gods".

The production here is an exponential improvement over any of their past albums, but then, back then underground bands just didn't have the means of modern recording. The guitars are clean and graceful, the drums far more dynamic than the crappy sound on the debut, and the vocals just knife directly through you. The question is, can you handle a more sorrow-born, simplistic and doom-laden brand of black metal? We're not talking something as dense and depressing as, say, Forgotten Tomb, but those who seek the truly grisly, harsh and primal tones of the underground might not hear satisfaction in this, and The Resurrection is surely bereft of complexity. But all told, I rather liked it. Perfect this is not, but an effective glimpse at what might have become if black metal had taken a drearier root to its goal of spirit leeching.