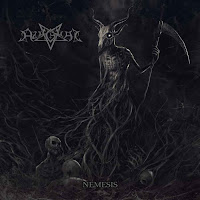 Finnish veterans Azaghal are not and have never been about breaking or transcending any black metal molds, and in this they remind me of their esteemed countrymen Horna. However, I feel that there are even less dynamic shifts between Azaghal albums than that other band, and their latest Nemesis is a strict and by the numbers continuation of the sounds they evoked through Teraphim in 2009, which in turn sounded a lot like its own predecessors Codex Antitheus, Luciferin Valo and so on. That's not to say that this is by any means a weak effort, because it's dark, corpulent production and songwriting mix and match strides to provide some variation in its pacing, but in listening through this, I felt that pervasive sense that this had all been done before, by the same artist, and better.

"In Deathlike Silence" opens with a rush of atmospheric blasting, while the tremolo melodies twist about the ruckus in a Swedish vein, and this is probably one of the more exciting tracks throughout, even though there's just nothing new about it, and the riffs are rather uniformly predictable. I like the rolling break where they layer in the cleaner vocals, but that's about the only twist I can think of. And this is the pattern for most of Nemesis. The band will throw out one to two decent guitar lines and envelop them in average patterns, in tunes like "Da Masticatione Mortuorum", "Satanic Devotion" and the titular "Nemesis". Where they slow down to a more churning crawl, i.e. "Vihasta ja Veritöistä" or the drudging "Ex Nihilo", they'll exhibit a heavier sense of melancholy in the picking, but then neither of those can really fill up its nearly 8 minute bulk with music of interest...

My favorite songs here were nestled nearer the end of the track list: the thundering black weave of dissonance and fury that is "The Pit of Shoggoths", and the straight rocking "Black Legions of Satan" which reminds me slower Carpathian Forest. Unfortunately, neither necessarily justifies wading through the remainder, and they're only slightly more rewarding than their neighbors. So really, Nemesis relies a lot on its production values and semblance to the previous albums to get by, and I'd take the song selection on Teraphim or Luciferin Valo any day over this one. Azaghal has nothing much to prove. They retain their musical competence, crushing if monotonous rasped vocals, decent lyrics, and a loyal adherence to the black metal principles that bands like Bathory, Hellhammer, and Mayhem wrought upon the unsuspecting audience of the 80s. But there is just not enough here to pick out of a lineup of similar records, even from the Finns themselves. Diehard devotees to the sounds of Horna, Behexen, Sargeist and Barathrum might derive some twisted pleasure from this, but I emerged underwhelmed this time.