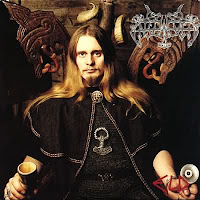 It speaks volumes of a band's capabilities when I can search their entire discography and not find a single full-length album I dislike, especially when that catalog covers an impressive 20 years. That said, there is always the inevitable low point in any saga, and long have I felt that Eld occupied that niche for Enslaved. Ambitious and evolutionary, like any of their individual releases, Eld (or 'Fire') was presumably meant as a thematic companion to the band's excellent sophomore Frost, only the range of content here is more varied and polished than either of the album's predecessors. And yet, this is one of those rare efforts that seems to grow progressively less compelling the further one journeys into its run time. Where it opens on an incredibly high note, the inspiration and variation of the work seems to plateau within the first half hour, and then crack on the last 30 minutes.

That's not to imply that there is a complete dearth of highlights located deeper in the track list, but most of its more poignant composition and technique seems fully extrapolated and front loaded within the massive 16 minute opener, "793 (Slaget Om Lindisfarne)". A memorable and hypnotic synthesizer pattern is subtly layered with choir-like keys and plunky electronic percussion to a ghostly effect, gradually panning into textures both martial and sorrowful before the wave samples and acoustics herald the metallic floe. While Enslaved were no aliens to melody on the first two albums, here you will note the increased use of Grutle's clean tones becoming a prevalent factor on the album, and the riffing exhibits a blissful escape like what we'll grow to expect from most of their 21st century output. Though the patterns are simple, and his range is rather limited, Kjelsson still proves himself a worthwhile crooner, never straying from his own boundaries, and yet nothing can really save "793" from an inevitable feeling of excess repetition in the largely instrumental passages at its tail end...

Of course, this is not Enslaved's first waltz with metallic superstructures, but this time the girth dwarfs even that of "Slaget I Skogen Bortenfor" from the Hordanes Land EP. The guitars are among the more attractive on this album, but I'm not sure it fully justifies its vastness, and it is telling that the extended keyboard is one of its real highlights. Other strong songs here include "Hordalendingen (The Man from Hordaland)", which has some exciting and interesting tremolo riffing, and some resonant, atmospheric rasps in conjunction with the more soothing clean vocals; and "Alfablot", which has a dreamy bridge section driven by a copious distorted bass-line. If I had to choose a victor from the latter half of Eld, it'd be "Glemt (Forgotten)", which seems a very well balanced piece with a few streaming guitar lines that really capture the imagination. Aside from this though, I've never been all that enamored of "For Lenge Siden (A Long Time Ago)", "Kvasirs Blod" or the titular closer.

Strong drumming, reasonably thought out note progressions, solid technique, but most of these remind why I found huge swaths of Vikingligr Veldi to be less engrossing than I might have hoped. There is a comparable streak of savagery running through this album to its conceptual sibling Frost, and yet that album was incontrovertibly more rapid, ripping and unforgiving in its delivery, all part of why it remains my favorite of the band's works in the 90s. Eld is unarguably more diverse and accessible, with a stronger overall production, but it lacks the charm, hostility and wintry depth, all of which I might overlook if the actual songs were better. Atop of that, I just don't feel all the 'Fire' about this album. Sure there is some war, some burning, and the title track features the element strongly in its lyrics, but I never felt in the slightest bit singed. Eld is adventurous, and its authors talented, but it's not nearly their best work.