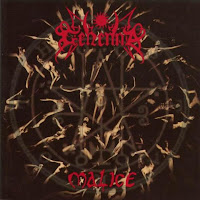 While the band's First and Second Spells were sturdy enough forays into the burgeoning black metal realm, products of their times with enough nostalgic appeal that they seem no rustier today, it was the Third Spell of Gehenna that would solidify their position as a true second tier fixture of that scene. Malice shows every capability of running neck and neck with the 'big boys', and while it's not written well enough that it will likely ever be remembered with the due reverence of an In the Nightside Eclipse, De Mysteriis de Sathanas, Det Som Engang Var or Pure Holocaust, it's nonetheless the peak of this band's creative and qualitative focus. Gehenna had ramped up their appeal in nearly every possible aspect, and as a result this, for me, stands as their strongest single work.

One of the complaints I had with the Second Spell album was its general lack of strong guitars to steer the songwriting, and as a result you had a bunch of mediocre distortion serving up support beams for the central keyboard melodies. With Malice, Dolgar and Sanrabb have picked up the slack admirably. Even as early as "She Who Loves the Flames", the opening cut, a drifting and dark guitar melody stands aloft from the backing synths and rhythmic chugging. That's not to say that the band has lost its symphonic edge: the keyboards of Sarcana have also improved, forceful and exotic when necessary but fully capable of the appropriate backing role. But for me, metal is and likely always will be about the guitar riffs foremost, and Malice is an album which pays out this philosophy in full, from the introspective, airy rush of "Made to Suffer" through the baleful, melancholic intro of "Bleeding the Blue Flame" and the almost Western-Gothic doom that heralds "The Pentagram". Hell, "Manifestation" is loaded with black/thrash speed licks that rank among their most exciting riffs ever...

Composition has also in general taken a leap beyond their prior output. Here, the band knows how to deliver the whole package. Many songs will have nice intros that absorb the listener for the explosive rush to come during blasted sequences, and they vary up the pacing just right. I would even go so far as to dub the album 'bold' for several of its pieces. Like the "Ad Arma Ad Arma", 14 minutes that cycles from well executed black metal to live noise sequence to some harrowing, dark ambient suffix. Or the progressive, melodic currents inherent in tracks like the titular "Malice". The creepy intro to "The World Became Flesh". From start to finish, there is just so much more of an esoteric fiber to Malice than its predecessors, so much more experience waiting in the depths of each component, enough to reward listeners through decades.

Production is pretty nice without seeming too overtly polished. For so much going on, it sounds well balanced but appreciably dark and incendiary. The guitar tone is great, and whether the band are experimenting with richer chord sequences or tremolo picking it stands out far more than the Second Spell, where it had almost no personality outside of the distortion. The rasps are more ominous, varied and the drumming of Dirge Rep crafty enough to place him among the upper echelon of Norse percussionists. The lyrics range from average to strong, but even where they lack they can be somewhat forgiven for the music supporting them. In the end, this is a work of dense dynamics and structured turmoil which rises to the level of its peers, even if it might not have generated the same level of veneration. It's not perfect, and perhaps all of the individual songs are not truly that memorable. But at the very least, I like this more than albums like Emperor's Anthem to the Welkin at Dusk or Enslaved's Eld, so it's a shame that folks didn't really pick up on it.