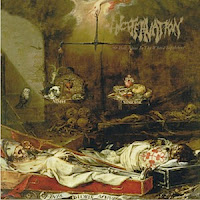 One of the more 'serious' projects in the vast lexicon of US musicians Ghoat (Justin Stubbs) and Elektrokutioner (Wayne Sarantopolous), Encoffination was formed with the intention of bridging the gaps between crushing, funereal doom and the nostalgic death metal that the duo gestates in their other collaborations Father Befouled and Festered. I say 'serious' because often with various of their works you can clearly grasp the endearing, tongue in cheek horror concepts, but O' Hell, Shine is Thy Whited Sepulchres could never be mistaken for anything even bordering on funny, unless you've got the sickest sense of humor this side of dead baby jokes. Brooding, somnolent, and oppressive, this sophomore strives to function almost solely on its atmosphere: you don't turn to Encoffination for riffs, they are merely means to an end. Your end.

Unfortunately, I almost wish they HAD preened the guitars just an inkling further when writing this material, because much of it feels rushed out the door, or about as rushed as this sort of sluggish molasses could allow. There are numerous strengths to the album, for instance the great intro "Sacrum Profanum Processionali" with its bells, atmosphere and incantations. The massive guttural devotions of Ghoat, which swell to the ceilings and arches of its emotional catacombs. The epic contrast of the drums, between its tinny hi hats/cymbals and enormously thundering deep end, the latter of which is moving enough to empty your bowels alone. For myself, though, I found the riffs in which the down-tuned tremolo guitar lines were joined by these curving, hypnotic bass lines to be the most memorable on the album, like the opening sequence of "Crypt of His Communal Devourment" or the drudgery of the verses in "Pall of Unrequited Blood". Sadly, the guitar lines themselves are not exactly evocative, just strings of notes that make sense for the style but fail to cling to the depressive mental nodes the album draws to the fore.

Encoffination recognizes the limitations of the medium, and thus some credit can be given for their implementation of atmospherics like low, brooding organs or haunted bells, but no matter how hard they season some of these riffs with funereal textures, they still often feel like tedious, disposable death/doom derivative of early 90s artists like Asphyx, Thergothon, Sorrow, Skepticism, Unholy, Disembowelment, etc. It's too bad, because where this album works, it works fairly well, and I enjoy a few of the other bands these guys are involved in. They've evinced mightier tones from their equipment here than on the more subdued, somber Ritual Ascension Beyond Flesh from 2010, but then it's not quite so engrossing either, since that album had this palpable distance to it which felt like you were experiencing it through some Cyclopean, forgotten subterranean temple in which you were soon to be sacrificed. O' Hell is far more up front and in the listener's face, and appreciably depressing, but I wish the metallic components had been up to snuff with its pacing and atmosphere.