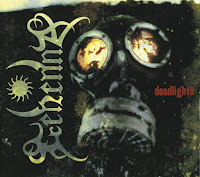 Deadlights was an EP released to develop some anticipation for the third proper Gehenna full-length, Adimiron Black, and as such it is played out more like a 'single' for the title cut, with a pair of bonus non-album cuts to sweeten the deal. Of course, in retrospect, this is another worthless afternoon at the CD processing plant. The track "Master Satan" would be released a few years later as a part of the Murder album, and the 2011 Peaceville re-issue of Adimiron Black contains the EP as bonus content, so there is little to no value outside the collectors' interests in tracking this down. For what it's worth, though, the music itself was quite promising, and stoked my interest in the ensuing album, even if it arrived only like a month after.

"Deadlights" itself continues the solid songwriting of the Malice album, with some meaty blasted rhythms and intricate, evil licks that remind me of something Emperor might compose. I admit to being a little bored by some of the individual riffs, in particular the slower grooves throughout, but in summation it seems a competent piece with some effort amidst all the banal growling. The band had weathered a few lineup changes here, with Damien coming in to replace Sarcana (she still appears on a few tunes on the full-length) and the great drummer Dirge Rep moving on to work with Enslaved and numerous other acts (he'd return much later). That considered, the central facets of Dolgar and Sanrabb remain solid, though I can't say this song exhibits any real growth from Malice.

The other tracks here are mildly superior, which is surprising as they weren't really intended as the highlights. "In Mother's Tomb" has a pretty basic verse rhythm, but the subtle synthesizers and vocals in the verse are better structured and the tremolo riff during the blast is decent, as are the descending leads past the bridge. "Master Satan" differs in production, with a more raw tone to the guitars, but the riffs themselves are quite catching, permeated with tasty thrash licks that, while not unique, at least exploit an authentic energy redolent of old Destruction. It's a bit of foreshadowing, since Gehenna would move on to a more balanced hybrid of black, death and thrash on later efforts. Of course, neither of these necessarily transforms the Deadlights EP into a worthwhile purchase, but they make a respectable addition to the full-length. This 15 minute short-form issue itself can easily be delegated to the dustbin, a promotional tool that sits like an empty soda can awaiting its recycled rebirth.