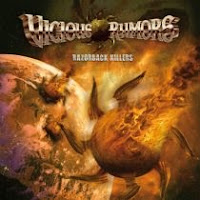 It's always a shaky period right after a band's beloved, long time front man leaves the fold, or in the case of California power thrashers Vicious Rumors, passes away well before his time. And yet Geoff Thorpe and crew have had an interesting go of it since Carl Albert's unfortunate demise in 1995, making use of a new vocalist on each subsequent album. In 2006, it was James Rivera of Helstar fame taking on duties for Warball, the best record these guys had issued in years, but half a decade later we've got Brian Allen for the followup. He's hardly a newcomer, having worked with underground US acts like Malice and Wild Dogs, with a style reminiscent of both Rob Halford's shrieking ability and Bruce Dickinson's sustainability, or perhaps more closely Andy Pyke of the UK Marshall Law.

That last comparison is especially apt, since Razorback Killers has a lot in common with that British band's latest, Razorhead (2009). Straight, heavy power metal with hints of thrash anger, heavily charismatic vocals in both verse and chorus, and loads of muscle to the guitars. Not a coincidence, really, because Vicious Rumors have been writing in this vein for the past 25 years. In fact, this album is highly reminiscent of the band's prior Albert-fronted outings like Digital Dictator, Welcome to the Ball and the self-titled album. Same balance of catapulted, harsh palm muted rhythms, sliding octave chords and biting, melodic vocals. The rhythm section on this record is hard enough to carve up concrete, and even though the chorus parts are not the most memorable of their history, they do no disservice to the simple song structures. Just like the Albert years, you get the impression that each line is being howled out at the heavens like a serrated rocket being flung at whatever unfortunate seraph happens to be near our planet's atmospheric envelope.

In other words, it is extremely difficult not to get excited when one experiences tracks like the mid-paced painfully Painkiller-esque "Murderball", the triplet trotting "Rite of Devastation" (which feels as if it were peeled right out of 1990) or the mighty thrashing of "Axe to Grind", in which Allen is joined by some solid gang shouting, another long-term characteristic of the band. No real power ballads this time around, which is fine by me, thought songs like "Deal With the Devil" and "Pearl of Wisdom" feature some cleaner guitars in the intros. Ultimately, I did not find Razorback Killers to be quite so catchy as its direct predecessor, and certainly there's nothing here as memorable as a "Town's On Fire", "On the Edge", "Hellraiser" or any of the songs I used to and still love from their first decade. But the abrasive atmosphere and kinetic swell of the music is certainly something you can crank into the night, and fans of bands like Leatherwolf, Marshall Law, or the solo material from U.D.O. and Halford will devour this like candy.