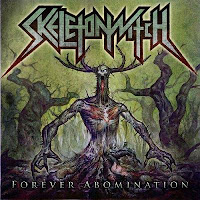 Skeletonwitch is a band whose music I've never felt was quite commensurate to the hype surrounding it, if only because I've never enjoyed their particular marriage of guitars to vocals. This somewhat changed with 2009's Breathing the Fire,their most impressive riffing gallery to date, as the guitars were finally strong enough that I could listen past Chance Garnett's monotonous black rasp. Two years out, and they've fired up the creative forge once more, with Forever Abomination, another colorfully fronted effort which features some of the tightest dual axe-slinging in all the metal realm, a duo writing riffs that actually matter rather than 'settling' for the same rehash you hear from about 99% of bands out there. Blazing, exciting and perfectly produced, they've just got one obstacle here...and you've probably guessed it already.

Yep, the black, rasped vocals return, this time even more one-note and irritating. Granted, it's not like the guy's delivery would be out of place in some black/death metal environs, but there is just something so disappointing that such effort goes into creating such a bright, pulverizing guitar tone and then spoiling it all with such a lackluster snarl that hides just behind it. It's like baking a three layer cake with fabulous fillings on each tier, then frosting it all with a dash of dull Betty Crocker chocolate icing. What's worse, Garnett's meter is so predictably generic that he almost never varies it throughout specific verses and phrases. You could have just sampled one or two syllables into an audio program and then cut and paste them in patterns and created a comparable emotional range. For fuck's sake, some variety would go a long way to making this one of the best modern thrash band's in the US. Syncopated gang shouts, a more guttural death vocal, or better yet, a charismatic, distinct voice like all the great 80s thrashers carried.

Another thing is that I just don't buy this band's lyrics. They write about demons and vengeance suffering and pain and Dark Ones and all this other 'extreme' stuff, not unusual for a black/thrash hybrid by any means, and yet it just doesn't feel right for some reason. I can't exactly put my finger on why. It seems like they're just throwing words together, scrabbling up some cliches to make them sound cold and evil, but I'm never on this album convinced that they actually believe any of it or even give a damn. A shame, too, because when I see a track called "My Skin of Deceit" or "Choke Upon Betrayal" I'd love to see it backed with some grit and meaning, but this instead feels like what might transpire if Hatebreed wrote an album based on the Necronomicon. Wasn't into it.

On the other hand, with those considerable gripes being aired in the open, there is no way I can deny the potency of the actual riffing. If only the lion's share of younger, 21st century spawned thrash bands were writing at this level of inspiration the genre would be alive and well. They do a lot of melodic black/death lines which give tracks like "This Horrifying Force (the Desire to Kill)", "Sink Beneath Insanity" and "The Infernal Resurrection" a semi-Swedish feel, and they often weave in tremolo melodeath passages, but where they really accelerate is through pure, high speed thrashing tension. "Rejoice in Misery", "Cleaver of Souls", "Of Ash and Torment" will all cave and kick in your skull, and just about every song on the album has at least one riff of merit tucked away inside. Whether Scott Hedrick and Nate Garnette are playing in perfect unison or splitting hairs and strings, the two work wonders here, backed by a firm rhythm section.

If only it had been different. If only this had a singer with the distinguished presence of a Tom Angelripper, Schmier or someone equally hostile and unforgettable, we'd be dealing with an enormously fun album. As it stands though, the rasping is a hurdle that it never quite leaps past, not only in the delivery but the actual engineering, and I really found it hindering my desire to keep on spinning through the song list. Certainly one to check out for riffing that will have your neck in a brace almost instantaneously, but ultimately the vocals and lyrics did nothing for me, and I enjoyed it somewhat less than its predecessor.