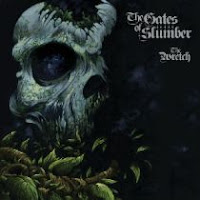 Perhaps the most formidable faculty of The Gates of Slumber is the band's ability to completely absorb you into its world of leaden and dark nostalgia. Like (70s) Black Sabbath or Cirith Ungol before them, they are so adept at establishing pace and controlling the listener's metallic metabolism that one cannot help but become transported directly into their tales of barbarism, vice, myth and fantasy. Their albums are like being immersed in a virtual reality tank in which the stories of Robert E. Howard and H.P. Lovecraft collide with the Biblical books of Revelations and Genesis, the fables of various European pantheons while an endless soundtrack of Psalm 9, Master of Reality, Be Forewarned, King of the Dead, and Born Too Late is spun out ad infinitum. Yes, that equates to awesome.

In fact, I don't think these Hoosiers have released one bad record to date. Perhaps not the sort of masterworks to which they themselves pay tribute, but I can't name The Gates of Slumber album to which I've felt no inclination to break out my mead horn, pipe, twenty sided dice, Viking helm and broadsword to face off squarely against some sea serpent or another. And The Wretch, their fifth full-length proves no exception. Karl Simon's husky, smokey tones channel Osbourne into a lower, more workmanlike register, while the guitars lurch along with just the right level of understated distortion to reflect a 70s rock purity. Much of the riffing architecture mirrors Tony Iommi from the first 4-5 Sabbath LPs, but what I find remarkable is just how humble and real this band comes across, as if they were performing for you right in the middle of your washroom or garage. Clean like a Cream or Zeppelin outing decades before its time, but just lowdown and dirty enough to escape any taint of excess pop polish.

I will say that The Wretch does not start out on its strongest foot. "Bastards Born" is arguably the most boring track of this bunch, but it still has a decent, central riff and some stops and starts with the vocals that recall something like "War Pigs". Once "The Scovrge Ov Drvnkenness" and "To the Rack With Them", arrive, though, it's GAME ON, the former a sweltering, foot thumping barrage of beer soaked bedlam bisected with some bad ass blues (forgive the tongue twister); the latter an incredible barrage of stolid grooves in which one can feel his or her stomach quake to the sheer volume of the butter churning crunch of amped up distortion and the cruddy curvature of the bottom feeding bass. Yet the album gets even more engrossing the deeper one travels, with the slow, suicidal swagger of "Day of Farewell" and the baleful, cautionary "Castle of the Devil" and it's bass-driven bridge and Ozzy counter-vocals standing out as personal highlights of the experience.

Through it all, with the possible exception of "Bastards Born" or a few less impressive moments in the 12+ minute "Iron and Fire", The Gates of Slumber evades the sense of derivative ennui that pervades so much of the modern and retro doom this past decade. The Wretch feels like a record that could have been cut in 1978, and it's that stripped down return to primacy which is so ultimately compelling in much of their work. Granted, the influences are laid bare on the guys' sleeves. No one is going to accuse this band of being highly original, and that's not what they set out to be, but instead masters of the past who offer you gifts of nostalgia in a delicious haze of drugs, dragons, demons and damnation. Along with the mighty Italians Doomsword, who have an admittedly busier, brighter sound to them, The Gates of Slumber have this corner of the stony market locked down.

Verdict: Win [8/10] (three sisters confess to the god below)