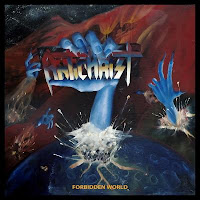 Fuck this band for taking everything I so loved about the early, aggressive thrash from both the Bay Area and German scenes, mashing it up, adding a relish of kinetic, blackened vitriol and then feeding it to me all over again. How is it that Sweden keeps churning out bands like this, or rather not exactly like this but from all over the metal spectrum, in such quantity and quality? It's like they have something in the soil over there that makes its way into their plants and livestock and inevitably ingested into some metallic lobe in their brains. Born metal, living metal and spewing metal into the ears of the rest of the world, so that we must writhe in the envy. For sure, there is nothing remotely unique about Antichrist. They couldn't even come up with an original band name. But with music this incendiary, exciting and enthusiastically vicious, they've done one better than innovation: coming up with what is the most fun release of its kind in many moons. Some of the most fun I've had all year in this genre.

The last blackened/thrash album I had such a strong reaction towards was Abigail's Sweet Baby Metal Slut in 2009, but that was a lot cruder with some straight speed/heavy metal undercurrents balanced off by the harsh barking. Antichrist is more explosive and refined, at least in terms of velocity and the business of the riffing, but lyrically and aesthetically it's just as primitive. Imagine if you might pick around in the time stream of the 80s and draw forth the very best elements of Destruction's Sentence of Death, Kreator's Pleasure to Kill, Slayer's Hell Awaits, Bathory's first few albums, vintage Possessed and Venom's Welcome to Hell and then breed them together for several generations in some dank, forgotten kennel in a corner of Hell. About a century hence, or rather 20 years give or take, the offspring of their offspring finally emerge from some crack into the mortal purgatory and unleash the devil's music upon the unsuspecting. Forbidden World is not 'news', perhaps, and hundreds of other bands have followed a similar path, but treacherously few with such ripping, diabolic finesse.

The first two traits that stunned me into submission here were the vocals and guitar tone. Front man Steken has this impressive, abominable ability to sound as if he is screaming and rasping at precisely the same time, as if he were singing from not only his mouth but some cut in his throat simultaneously. Whether it's single tracked or double tracked makes no difference. The guy is part Schmier, part Jeff Becera, part Tom Araya and perhaps a hint of 'Hellbutcher' Gustaffson from fellow Swedes Nifelheim. The guitars are nice, crisp and crunchy, yet their fuzzy nature never falls behind the intense pace of the music. I can't promise that every pattern on the disc isn't at least derivative of some past recording, but the notes always play out like pitchforks being stabbed through your spine at incredible speeds and as a result you've got no choice but to flip about like a marionette of unwitting carnage. In addition, Antichrist has done well to cast the leads in a brighter, spurious tone so they leap off the rhythms like evil incantations leaping off some weathered scroll.

Selecting particular highlights here is almost impossible since every song is so entertaining, but I feel like "Militia of Death", "Victims of the Blade" and "Sign of the Beast" are all fine examples of their uppity thrust that would immediately impress anyone into the more extreme speed and thrash of the mid-80s, or the blackened variations since. The Swedes can also show a softer and more atmospheric side to their music in the titular "Forbidden World", a gorgeous acoustic interlude, but this is an exception to the rule. Other points of interesting include "Necropolis" and "Minotaur", both of which are 8 minutes long and have a more varied, epic structure that often recalled some of the Japanese Sabbat's more ambitious offerings. The leads are almost always intensely memorable, the tremolo and muted guitars engaging and loaded with twists and turns, and the vocals simply incredible. About the only thing I could not count in their favor is that the lyrics and titles seem pretty derivative of their influences (if not poorly composed). But then, if something is this damned good, I maintain that there is always room for more.