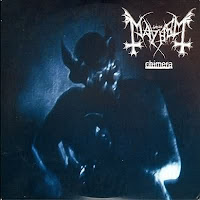 Where De Mysteriis Dom Sathanas might represent that gang of greasy, intimidating 'cool' kids that hang out smoking cigarettes behind the ruins of your old town library, and Grand Declaration of War the crowd of nerdy, preachy PoliSci hopefuls at your community college, Chimera is the clean-cut heartthrob that you will most likely deem fit to bring home to Mom. That is, if your Mom is the fucking Devil, and plans on seducing and devouring such a wanton sacrifice. Mayhem have honed in on their production values this time out, and presented what must be their glossiest, most straightforward effort to date. The surgical precision of the riffing from the prior album are retained, and yet there's a backslide into extremity here that recalls the Wolf's Lair Abyss EP. The guitar tones are far thicker, and the vocals more ghastly and copious, abandoning the spoken word bits, and for many alienated souls, this might damn well have been the return to crushing form that they so desired.

That said, this album is not nearly so callous or grim as the band's early recordings. Mayhem are still taking some chances here, just not a lot of them. In truth, I'd say that Chimera serves as a solid 'point of entry' for fans of more technical, brutal death metal, or perhaps the more potent black/death hybrids. They'll appreciate its musicianship and dynamic range more than either the strangeness of Grand Declaration or the cold breath of De Mysteriis. The Norwegians make an appreciable showing themselves as individuals who have their fingers on the current, and can blast and burst along with the brightest, brashest younger demons in the field. I never really got the impression that they were going solely for that same, out of control momentum that they displayed on Wolf's Lair, but it's difficult to deny the pure bruising hostility of opener "Whore", or the bludgeoning speed and fire of "Slaughter of Dreams".

Still, the moments here that I found most interesting were those where the band continued to explore their dynamic potential. Like "Dark Night of the Soul" with its dire, grooving inaugural riffs that reminded me of something Carpathian Forest might pull. Or the chants that break out in the middle of "My Death", perhaps the atmospheric pinnacle of the entire album. Or that majestic blend of deep percussive bombast and melodic bending that inhabits the warlike rush of "You Must Fall". For sheer punishment, it's hard to ignore the wealth of riffing present in "Rape Humanity With Pride", or the blitz of distorted bass grooves that set up the hammering entropy of "Impious Devious Leper Lord", which also features some clinical, creepy melodies at the half way point. I'd also be remiss not to mention the closer, the titular "Chimera" and its alternation between lurching rock grooves and spasms of tremolo and double bass.

It's not the best of Mayhem's albums, and admittedly, I like it the least of the four full-lengths to date. Half the songs don't really jump out at me, even when they've got 1-2 interesting riffs or sequences within. But as far as the general metal audience is concerned, who could give a shit about the raw aesthetics being heralded by most genre advocates, the production here will go a great length to compensate. This is the Mayhem album that will probably sound the best as it booms out of car speakers, pissing off parents, parishioners and high school principals. Dethklok fans will sport instant wood. It's not a record that one wishes to experience for its atmosphere, but the concrete rhythmic currents and slavish, churning Maniac vocals that drive it. It never sticks its neck out quite far enough that it's head could be chopped off, and to this extent, it's a success, although not an incredibly compelling one outside the lyrical sphere, in which it often feels the most deeply personal.