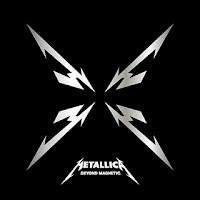 As anybody who has listened to Metallica in any significant capacity over the last twenty or so years will tell you, following their recording exploits is an exercise in building up trust, only to have it shattered and shit on shortly after... only for it to be built up yet again. And then likewise shit on again. Yes, trying to be a Metallica fan through the ups and downs of their career can be somewhat of a struggle. For some it became unbearable as early as the Black Album, and for those who persevered through the bands uncertain 90's output, they would find their own disappointment in their exceptionally controversial St. Anger. Their 2008 studio album, Death Magnetic, offered the surest sign of the band finally returning to its roots, serving as the best signifier of a potential rebirth of the band that once (and arguably, still do) ruled the musical landscape.
Fast forward to 2011, and Metallica releases the unanimously abysmal, polarizing collaboration with Lou Reed, Lulu. Arguably the biggest slap in the face to fans yet, the album is undoubtedly the biggest test of faith to any fan. With that in mind, it's hard not to see this newly released EP, compiled of four songs leftover from Death Magnetic recording sessions, as a sort of apology to the fans. "Don't mind that old hack we just dug up to sing along with us. We're just messin' with ya! Does this make things all better?" Whether or not you enjoy this will depend largely on whether or not you've given up on Metallica already, but I think this offers that same kind of hope many fans clamor for, the kind of hope that the boys will finally cut the shit and give us the album we've waited years for. The fact it also comes about at a time when the band is in the midst of celebrating 30 years of playing music is also no coincidence. And also a cash grab, probably, but these guys have been "selling out" since day one depending on who you ask, so who gives a fuck?
The EP gets off to a god start with the locomotive force of "Hate Train". Getting into the swing of things with a riff reminiscent of "Fuel", only with a little less NASCAR, and a little more ferocity, the song barrels along for about seven solid minutes. A chugging verse riff leads into a mellow, clean-guitar chorus, with Hetfield lamenting how "you took away tomorrow, still I stand". Considering the history, the lyrics display a sort of rebelling against the pressure from fans that have left the band for dead long ago. It comes off as a big "Fuck you!" to anyone who wants to argue with how they've done things. The song is a riff-machine, with the descending line at the 4:20 mark really kicking things up a notch.
The most out-of-the-box offering here, "Just a Bullet Away", features a riff that stomps and weaves around, sounding rather unlike anything else we've heard from these guys before. Hetfield's vocal performance will draw some (negative) attention from some; in particular the line, "Suck on the barrel, Suck it 'till it's gone dry". The song segues into a melodic interlude that brings to mind "Master of Puppets". It steps outside into a more progressive realm that the band doesn't jump into that often, and while it sounds slightly unfamiliar it works quite well.
My only personal weak spot on the EP takes form on the rather bland "Hell & Back". It feels like it would fit better on Load/Reload, with a clean guitar verse and a dull chorus. Things pick up around the 4:00 mark, but... overall it barely registers a "meh" from me. Kirk's solo feels somewhat uninspired as well, and sounds too much like what we've already heard on Death Magnetic. Not that Kirk ever was a super virtuoso like his thrash contemporaries, but he has played better leads elsewhere, including the album from which these songs find their origin.
The package wraps up with the blitzkrieg intensity of "Rebel of Babylon". While the riffing heard in the verse isn't a marvel of technicality, it's fast as fuck and Hetfield sounds kick-ass. Listen to the punk guitar riffing as it leads into a very Mercyful Fate-ish chorus riff. Fuck yeah! This song makes me want to run around and break shit, screaming like the rebel described in the lyrics. A very cool harmony section comes at 5:20, one of the many highlights of the track.
Looking at the EP as a whole, I wonder how some of these songs didn't make it onto the original LP. "Just a Bullet Away" and "Rebel of Babylon" would've added some welcome diversity and intensity to the set, and even "Hate Train" is better than some of the other songs present on the original album. The fact something like "Cyanide" and "Unforgiven III" made the cut while these didn't is slightly puzzling. That said, the EP itself is a fun little taste for what the band may have in store for their upcoming new album. The sound itself is rough, having not gone through any proper mixing, and it does show in parts. But overall, the guitars are loud and James sounds great. I'd almost go so far as to say it sounds better than the brick-walled abomination that is Death Magnetic's production. This won't serve to change anyone's minds if they don't care for the band anymore, but for the more dedicated fan, this is worth a listen.
Verdict: Win [8/10]
http://www.metallica.com/
Posted by GreasyKidsStuff at 12:53 AM