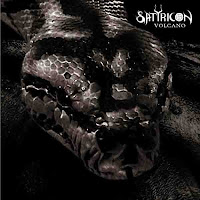 Whilst Rebel Extravaganza might have seemed the most 'undecided' album in the Satyricon canon, Volcano is for sure the strangest. In what sparks of a minor identity crisis, the band had decided to shift almost entirely into a new, black & roll terrain which relies heavily on catchier grooves and simpler song patterns than one would ever have heard on a Nemesis Divina or Dark Medieval Times. Naturally, with this decision came the parting cries of horror from some segment of their fan base, who could no longer categorize them into some safe, compartmental mold, but then most of these folks had already been flaking off from the previous album or even before that. Yet, what's even more unique and unexpected about Volcano is the use of small ambient and electronic tweaks, female guest vocals and more overtly the fact that, for all of its mutations, Volcano is not entirely committed...

I'm of course referring to the opening track, "With Ravenous Hunger", which seems like another straight black metal track circa Rebel Extravangaza, flourished with a brief industrial intro, Gladiator quote, and some straight bursts of blasting that cede to slower grooves. Ironically enough, I found this to be the least interesting tune on the entire disc. There are no hooks here which caught me, just cycles of hostile riffing so bland that if the name Satyricon were not upon them, they'd rate no greater than some random underground derivative. The atmospheric break hovering around the 4 minute mark introduces some ghostly synthesizers, but the guitars are still quite predictably boring. It also introduces us to the newer, more monotonous Satyr, who has seemingly lost a little of the character of his voice. I can only imagine that the desired effect was a sort of numbing, maniacal hypnosis, but throughout Volcano I found they were not quite up to par with some of the earlier or later efforts.

However, I say: if they wish to rock, let them rock. Provided that they rock well. And with the onslaught of the second track, "Angstridden", Satyricon shifts into an industrial rock territory which frankly was a lot more fun than the first. Note that the drumming is organic here, and Frost does well to emulate the mechanical nature of the song with his hi-hats and double bass, but the real strength of the song is that central groove. Those fearing that the Norwegians had completely lost their mind here, fear not, there's a black/thrash segment of the song in the center which is palpably exciting, some electronic noise infused as it escalates towards a total freakout riff 2:00 in. This is also where they introduce us to Anja Garbarek's ethereal, sparse vocal lines, which sound quite a lot like earlier Portishead. Normally I balk at crass attempts to incorporate female vocals, but in Volcano's case they're tastefully and briefly implemented.

Sure enough, it's the slower, grooving tunes here that caught my attention far more than their occasional steps backward. "Fuel for Hatred" functions off a few leaden, simplistic guitars that use harmonics as percussion while Frost drives the party from below. "Suffering the Tyrants" is a moodier, more atmospheric piece with lots of thick double-bass, curving serpentine riffs that often recall Celtic Frost, and spikes of debilitating higher register melody while Satyr sort of narrates the affair like a bitter, decrepit specter. Then there's "Possessed", which explodes into a black/thrash direction, the excitement elevated due to its placement after "Suffering...". Riffs here are decent, if nothing distinctive, and the doubling of the verse guitar gives it a clinical motif that sets up the concrete thrash breakdown rather well. Other standouts are "Repined Bastard Nation", a spectrum of tremolo lines, grooves and industrial/ambient overlay, and perhaps 50% of the 14+ minute saga "Black Lava", which lurches along much like its titular matter might.

It was the new Satyricon. It wasn't for everyone, and in truth I feel that this album, and its direct predecessor kicked off a little bit of rock star narcissism in its pair of constituents. Never a welcome thing, but not at all anomalous. Band grows more famous, gets on bigger tours, is placed in a position where they are often surrounded by the 'beautiful people', and what else can you expect? The fact that Satyr and Frost kept their grisly vocals and barbaric, thoughtful lyrical imagery among their new found windfall speaks that they had no intention of letting it all get to their heads. Because of that, Volcano is honestly a pretty good record, with a brooding mix and a good portion of pent up anger. It stumbles on occasion, in particular where the band decides to regress into more familiar, stock black metal terrain ("With Ravenous Hunger", parts of "Mental Mercury") and neglect to incorporate the quality riffs that made the band in the first place. But as a 'whole' experience, it's certainly a full step above Rebel Extravaganza.