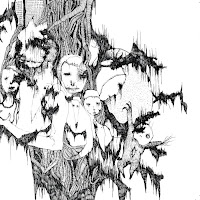 The Blood Dance spends about 20 seconds teasing you with some glinting illusion of acoustic tranquility, and then bludgeons you over the head with a coarse surge of melody and crushing guttural vocals that immediately conjure forth an atmosphere of anger and decay. The fact that it's largely the project of one man's imagination (with a session drummer) is flabbergasting, and yet it's not just the actual musical ability which impressed, but the massive, flood of production here, incredibly well balanced and more than I might expect of bands with a far larger budget. We're truly living in the future here, and it's about damn time...

But while the Majestic Downfall sophomore seems to take full advantage of its modern recording, the actual music owes fealty to the long lineage of death and doom that started with acts like Paradise Lost, Katatonia and Anathema back when they were all packing a much harder punch of sorrowful release. Like tears of earnest agony, Jacobo craetes these massive melodies in the meat of the compositions that recall the beauty of such albums as Icon or Dance of December Souls. Yet the vocals sound even more enormous than the guy's obvious influences...truly if there were ever a tortured outcropping of emotions on an album of this sort, it was this one. His growls, often panned between speakers are massive and unforgiving and they almost serve as a direct, welcome contrast to the beauty of the music.

Another forte is the ability to languish on long compositions without numbing the listener to the brink of ennui. Many of these eclipse 8 minute durations, with "From Black to Death" turning in at 11.5 minutes, but despite their bulk, tracks like "Dimension Plague" or "An Untraveled Road" offer constant value to the listener willing to plumb their depths. He'll break into these massive grooves ("An Untraveled Road") or eerie, unexpected melodies, well before you'd gotten tired of the intro rhythms, and even instances of pure atmosphere like the bass-driven, howling miasma that arrives before the 6 minute mark in "Army of Salvation". I can't say that every individual riff is all that intriguing, clearly we've heard their sort before and the notes are not always configured to optimal, distinguished patterns that will hypnotize the listener, but in general he does a damn fine job of mixing them up.

At around 63 minutes, the album does seem a little corpulent, but not because the content is choked with musical trans-fats. It's just that the potential audience needs to clear an entire hour out to soak in the sadness, the cries...errr, growls for help and attention, and that does seem a bit much. That said, The Blood Dance is clearly an accomplishment for just one man, and I don't think anyone could argue the heart and soul poured into this, the well executed songcraft and the solid production (without an excess of crippling polish). If you're into the heavier Katatonia records, or modern death/doom acts like Isole, Draconian, Forest of Shadows, or Ablaze in Hatred then you'll want to place Majestic Downfall on your mental map.

Posted by autothrall at 7:50 AM