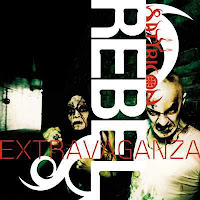 If Rebel Extravaganza seems a mite fragmented in its intents, that fact rests solely on its shoulders as the 'transitional' period for the band. No longer simply content with haunting the isolated, winter shadows of some fantasy northern clime, Frost and Satyr made the decision that they'd modernize their lyrical focus and pursue a more straightforward, rock-inflected path of black metal, sort of a newer take on the ghastly Hellhammer without resorting to most of the same riffing patterns and vocals. Surely there were hints of changes with the prior album, Nemesis Divina, but where that stood at upon some glorious precipice with its brazen production values and epic, absorbing composition, Rebel Extravaganza takes us down from the mountains and into the yearning, sinful caverns of human spite.

Yet, at the same time, it is unwilling to throw away some of the bloated, burdensome structures that characterized the band's earlier, breakthrough tracks like "Dark Medieval Times", "Walk the Path of Sorrow", or "Immortality Passion". In fact, this album is book-ended by two rather enormous sonic sculptures: "Tied in Bronze Chains" and "The Scorn Torrent", both well over 10 minutes in length and sadly in need of a clipping. The former actually has some great riffing, like the dire swerve at the 2 minute mark which foreshadows a lot of their writing for albums like Now, Diabolical and The Age of Nero; the latter is something I might completely forget if not for some of the warmer bass-lines alongside the faster paced, melodic tremolo guitar passages, or the creepy lush bridge which dazzles for at least a few measures. In either case, though, there is clearly about 4-5 minutes of interesting content and then a lot of filler riffing and tedious shifts in tempo that never come off exciting or remotely necessary.

There are also several ambient/filler tracks here which don't really add a lot to the album, with the possible exception of 'hey, look at us, we're really esoteric'. "Rhapsody in Filth" is interesting for approximately 10-20 seconds with its sheen of sparse guitars, while the ringing distortia of "End of Journey" feels an entirely baleful experiment that should have just been snipped on the cutting room floor. "Down South, Up North" at least has a nice, percussive backbone to it, but the music itself is just fuzzy chugging that does no service to the 10 minute plus leviathan to follow. I might listen to this when traversing some sewer level in a survival horror video game, but there is nothing nuanced, subtle, enticing or enduring about it. And it's this very disjointed coalition of having long, fattened tracks in need of compositional calisthenics, and pretty boring interludes that make the entire 60+ minute experience of Rebel Extravangaza play out like an album in some desperate identity crisis...

But what of the rest? Well, to be completely frank, the 6-7 minute tracks on the album provide almost all of its thrills, even if a few of these could also be passed on. "Filthgrinder", for example, is a fast-paced, vicious explosion of extremity that utterly fails to hook the ears until possibly the thrashing bridge/breakdown, which in of itself is not so great. "Havoc Vulture" has this solid, grooving undercurrent which I found amusing, but despite its tinny, unnerving production and the copious, curving bass-lines it did not leave me much of an impact. "Prime Evil Renaissance" is once again a song which measures off some vapid, dull charging rhythms with an impressive, evil and atmospheric mid sequence that seems so much better than what led into it. And then there are two admittedly great songs: "Supersonic Journey", which has the best balance of riffs and blasting out of all the speedier writing, and "A Moment of Clarity", which is another tune that hints at the direction of the band for their next three full-lengths. Steady, dark and twisted groove rhythms accented with intense double bass sequences.

If this were an EP with those last two tracks I mentioned, and perhaps half of "Tied in Bronze Chains", It'd probably amount to one of their very best releases. Alas, there is all the rest of the sodden mire to trudge through, and even while nothing here is actively 'bad', it's the one album by Satyricon I feel bored in listening to. As a fan of both their earlier body of work, and their later, divisive black'n'roll sound, I feel that Rebel Extravaganza's just not able to commit itself. From a production standpoint, the metal tracks are certainly consistent, with a raw and organic edge to the guitars, a humble drum mix and audible bass, vocals and effects, but the songwriting often feels like a bunch of scrap that the band had sitting around as they mulled over their next choices in aesthetics. The cover of the album reeks of the narcissism that the band would later include in their fashion video "K.I.N.G.", even if they're going for ugliness over glamor here. The vertical/horizontal text mash-up is a gaudy attempt at looking swank.

That said, I like the lyrics here, which explore various human vices and shortcomings with a more personalized resonance than their past recordings. And, well, there are at least a few good songs here...if you care to dredge the serpent slough for them. Ultimately, though, the album just doesn't have the dramatic, raging flair of its predecessors, nor the full-bore oblique rocking and grooving of its successors, and it sort of sits in stasis, a lull in the more exciting action, a stopover on some greater journey, more of The Two Towers than The Empire Strikes Back.

Verdict: Indifference [6.5/10] (protect the wealth of the Elite)