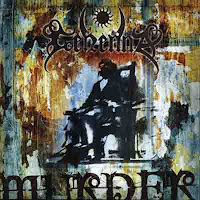 Unsettled by the option to continue repeating themselves, Murder represents a somewhat new direction, an urbanization of Gehenna's sound for the 21st century. Many of their Norwegian peers had also undergone such transitions, resulting in the divisive new sounds for Emperor, Mayhem, Enslaved, and so forth, but Gehenna, being somewhat below those acts on the radar, had a little extra space to work in. Unfortunately, Murder seemed rather to 'dumb down' the band than improve their lot in the scene, and it's in my opinion the worst full-length of their career. The band have kept only small traces of their black metal past, instead forging a lot of death/thrash riffs, and this was not that unusual a choice (Myrkskog had a similar transformation for their sophomore).

However, what plays out on Murder is not quality thrash, but more akin to the rather crappy, thrash/groove sounds of the 90s, made popular through bands like Pantera, Machine Head and Skinlab, with perhaps a fraction of the modern Slayer. This manifests in a bunch of truly boring palm/mute thrash grooves cycling around small series of notes that feel predictable and more than a little 'tough guy' in translation, exploding into a dissonant chord here or there as in the title track or "The Crucified One". Granted, Gehenna do not prove inept at this style, and it's not nearly so annoying as many of the deservedly mocked or forgotten failures of that mixed decade, but it's difficult to soak in one of the faster, blasted tremolo sequences they have culled from their past, and then switch off to some vapid, dull breakdown. Another issue I took here is the vocals, they're fashioned more in that groove/industrial angst redolent of several bands I listed above, and they seem to hover a bit too low next to the guitars.

Speaking of the guitars, it is their boxy, huge tone which helps rescue this album from a one way vacation to the shit pile, because no matter how much I disliked about half the riffs on the album, the mere sound of them helps compensate for their lackluster showing of creativity. In short, the production here is superior to the songwriting. "Master Satan", a track drafted forward from their Deadlights EP, is positive writhing with aggression, and "Devout Dementia" has some refined, eerie slower riffs which propel it to the top of the crop in terms of survivability. I've seen some people refer to this album as 'death metal' on the whole, but there are really only traces of that. No, this is pretty pure brickhouse, neckbreaking thrash from the mid 90s with a few bursts of Gehenna's black metal fundamentals, mediocre lyrics, and unfortunately this hybridization does not pan out entirely in the record's favor. Not bad if you want a 'black metal' Biohazard or Machine Head, but otherwise I wouldn't waste my time.