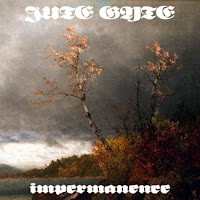 I could very easily see Adam Kalmbach's Jute Gyte project become a sort of Blut Aus Nord for the states, a consistent exhibition of both the black metal and ambient spectra which is wholly unafraid to join the two in a selection of marrow draining compositions. To date, he has danced both sides of the line, with several recordings that are fully in one camp or the other, but even so, external influences very often bleed into the stream of inspiration, and Impermanence proves no exception. The rustic, leaning limbs and autumn leaves of the cover would normally leave one in question of just what the DVD packaged album might aurally contain, and yet the title itself is married completely to the image, a portent that no living thing can sustain indefinitely, and that the dying itself imprints an fleeting and desperate beauty upon the retina. Or, in the case of Jute Gyte, the ear.

I've warned before that Kalmbach's records are not easy to access, and the constant holds here. Why, even in the very first track, "Meaninglessness and Waste", a rush of dense and raw, drum programmed blasting must be endured before one arrives at the more curious bits, like the wending, droning guitar melody and the alien dissonance in the rhythm guitar and bass tone. You will not find the sort of consonant, ear pleasing tremolo spurts you expect from the friendlier, Scandinavian exports, but rather noisy and drudging tones aligned more within the controlled discord of French acts Blut Aus Nord or Deathspell Omega, if not always performed at the same intensity. Or maybe a touch of Havohej. Where Jute Gyte excels, however, is in Adam's patient ability for the 'reveal' of the composition, how its bared teeth gradually part to expose a tongue which turns to the cadence of several musical languages. Several of the tracks on this album feel as if I'm watching a Lars von Trier film, awaiting the inevitable, always fucked revelation that makes the audience gasp in confusion or release.

Some of their opening credits consist of a more metallic nature, as in the aforementioned opener "Meaningless..." or the harrowing onrush of "Partial Wing", but then you've got exceptions like "The Wild Rain", which feel more like a canter of epochal sludge-punk dowsed in a guttural vocal dressing. Or "Hermit Haunter of the Lonely Glen", which is inaugurated by descending cycles of glinting melodies that lapse into the black/noise onslaught. A lot of the songs have these great, plunking bass patterns that erupt into some sodden progressive fog which falls somewhere in betwixt a garage Primus and undiluted Seattle grunge haze. But there are also some notable ambient passages, like the janky titular guitar interlude or the sinister, warped bridge of "The Old Hills' Indifference" before it storms into the unhallowed traffic of its oozing bass and ambient spikes around 5:30. The point is, with just about every single piece of music (excepting the title track), there is something waiting in the wings, something you might not expect...

And this is crucial in maintaining the listener's attention span. Most of the songs here are around 9-10 minutes in length, so to loop the same ideas endlessly would cripple their effect. Yet, Jute Gyte somehow never seems aimless in direction. The surreal, impressive lyrical imagery seems to compensate for the often one-track, tormented Burzum vocals, and while not every guitar pattern is captivating, they are never recycled beyond the point of no return. Something new is always around the corner, but the songs never seem excessively spastic or ADD-attuned. The production is feral and traumatic without actually hurting the ears like a Nattens Madrigal. In the end, I've found Impermanence to be the most impressive of Jute Gyte's works to date, further exploring along the axis of an Old Ways or Verstiegenheit without abandoning that same, isolate, outsider vision.