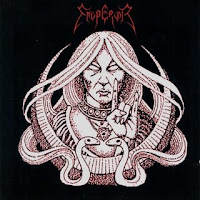 Emperor had gained an enormous momentum through the mid and latter half of the 90s, and thus demand for their unreleased demo material was soaring in between their studio albums. Candlelight caved in and re-issued the band's Wrath of the Tyrant demo (1992) and s/t EP (1993) as one package, with the sole amenity of some remastering to potentially curb the shock that Anthems to the Welkin at Dusk fans might feel towards their favorite Norwegians' cruder origins. I've already reviewed the Emperor EP at length, so here I shall focus more on the demo material incorporated here, since I think the first four tracks are better experienced along with their Enslaved counterparts (Hordane's Land) on that split.

Interestingly, Emperor traced a career path similar to their countrymen Darkthrone. They evolved out the death metal act Thou Shalt Suffer, producing some demo and EP material in those confines before adopting a new style in the vein of predecessors like Bathory, Mayhem, Venom, Hellhammer and Darkthrone themselves, and thus Emperor proper was born (Ihsahn would later continue his alma mater as a separate, neo-classical/ambient entity). It is clear right from this demo, though, that this band would be traveling down a more grandiose, 'epic' path than some of their contemporaries, only it was not fully realized by this demo. Wrath begins with a solemn, ominous ambient/choir piece and then transitions into the churning and atmospheric "Ancient Queen", in its rawest form here with enormous, splattered black rasps that permeate all of its steadily mid-paced, pummeling rhythms. Ihsahn sounds rather like a corpse painted clown here, because the vocals are often too boisterous and silly for their own good, but the voice itself is quite impressive and hostile.

The best thing in listening through this is obviously hearing the tracks that didn't really make it further on in their career. Pieces like "Ancient Queen", "Witches Sabbath" and "Lord of the Storms" would all shift forward to the 1994 EP As the Shadows Rise where they were given a more polished studio treatment. "Wrath of the Tyrant" and "Night of the Graveless Souls" are also part of the Emperor EP. But the bombastic, murderous rush of "My Empire's Doom' would not be heard again until the Scattered Ashes comp, and it's probably one of the best songs on this demo, despite the rather primal riffs. I enjoy the sluggish breakdown and how it explodes back into Ihsahn's despotic vocal heresies. "Forgotten Centuries" is laden with a similar, kinetic consistency and some swaggering groove-riffs, though despite the remastering the drums can still become sinewy and lost to the meat of the guitar tone. "Moon over Kara-Shehr" is not my favorite of the lot, focusing on slower, groove rhythms, almost like a Hellhammer black/doom, but here at least the vocals are as venomous as a crown of writing serpents.

The fact that the entire demo is present and accounted for, without being fucked about, is reason enough that the band's fan base, most of whom got into Emperor years into their career, might just wanna check this out. It's not great, I'll admit, and the redundancy of some of its content does erode some of its potential value (for instance, the In the Nightside Eclipse songs from the EP simply do not sound as great here as on the full-length). But it's certainly the sort of thing that genre purists will likely hold up as a favorite due to its roughness, hostility and sincerity, similar to how recordings like Deathcrush and Ablaze in the Northern Sky have shown long legs. This material represents the emergent black metal realm (or second wave, if you count the prototypes as the true pioneers for the yet-unnamed genre) at its primacy, and yet there were hints even here at the isolated grandeur Ihsahn and friends would strive towards.