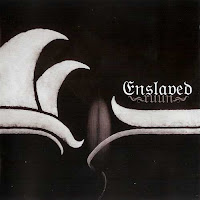 All artists have a bad day once in awhile, so it says a lot that a bad day for Norway's Enslaved is still superior to the vast array of music being released worldwide. Ruun is my least favorite of their 21st century outings to date, the least impressive and distinct, and yet there are particular tracks on this that I simply wouldn't want to live without, given the choice. But where it drags its heels is in raw staying power. I used to admire the album quite a lot when it was originally released, but in the ensuing decade I've found myself reaching for it less often than its amazing neighbors like Vertebrae, Isa or Below the Lights. Nearly all of the better tracks are front loaded on the running order, and while I wouldn't characterize any of them as 'bad', I cannot deny that Ruun will occasionally grow dull in its latter stages.

There's not a lot to separate this from Isa in terms of its production values and the writing style. Enslaved are still incorporating a lot of similar melodic textures as the last few albums, only hear they seem to ever so slightly age, and not necessarily like a fine wine. Definitely some of the same post-rock or post-punk appeal as you heard on the driving rhythms of Isa, with hints of jazzy warmth and a careful balance between consonant and dissonant note sequences. One thing I can say is that, on the whole, Ruun feels 'colder' and more emotionally distant than its direct predecessor. Not because the band are writing lyrics that are any more tortured or painful, but just in the way the songs are set up, and the choice of Grutle Kjellson to use a more open, grating snarl than Isa or Below the Lights, which doesn't feel as contrasted due to the wintrier feeling of the guitars. I should also mention, though, that the clean vocals here feel mildly less dweeby than they were won to do on Isa, but this comes at the price that they're often less catchy.

Certainly, the first three tracks are exciting here. "Entroper" opens with some layered strings and surges into a space rock riff somewhere beneath Hawkwind and the Foo Fighters. The song really picks up during its bridge sequence, where the choppy, punctuated guitars provide a foundation for the scintillating, background ambiance, rasps and the swerving, jazzy bass line. "Path to Vanir" has the best verse riffing of the album, at a mysterious and majestic pace which once again gives the impression that the band is reaching back into its colder myth-history. The chorus in that song is fucking immense, as Ivar and Ice start laying on the tremolo picking quite thick, while varied rasps and ominous growls stretch out over the canvas, vaguely concealing the organ tones. Probably the best singular moments on this album, but I also quite enjoyed the folksy calm half way through the song. "Fusion of Sense and Earth" is also a stormer, a faster paced tune with dissonant verse riffing not unlike Voivod in their prime, only more open.

After that, though, it becomes more difficult to pick out 'highlights' as songs and not just smaller segments of said songs. They attempt to create a curious, almost desert-like mystique with the guitars of the titular "Ruun", and focus in on cleaner picked melodies, but after about a minute the song never really throws anything interesting at the listener, not even when they start churning out the wall of sound they had become so adept with. "Api-Vat" has some nice, stringy muted note progressions, but never seems to hit a climax, while most of the music to "Essence" treks along predictably in support of the numbing, clean vocal harmonies. And while "Tides of Chaos" adds a great, majestic lurch to some of the proggier writing on the album, it too seems to lack that unforgettable 'money shot' that so many of the Isa tracks possessed. Even the doomy, melody-laden drive of the closer "Heir to the Cosmic Seed" fails to deliver on its early promise.

That said, all of these songs are still fairly pleasant to experience from time to time, and far be it for me to say that they're ever poorly written, or necessarily 'filler'. Ruun is durably consistent in tone and specialization, and the worst I can really say is that it's simply not their most fertile and resonant offering, easily forgiven when I take into consideration what they'd release next. I'd say that fans of Below the Lights or Isa would not be heavily disappointed with this. It often strays towards the former, other times to the latter, just not with the same incredible riffing payoff. In terms of lyrics and production, I can voice no complaints, and regardless of its status as a minor stagger, it's nowhere even near a fall.