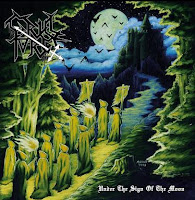 I remember listening to this German band's first full-length The Rise of Satanic Might last year and thinking, while it had some potential, that Cruel Force were an authentic if brash and unmemorable entry into that blackened thrash cauldron which also stirred up names like Nocturnal and Witchburner. Lots of tangible, demonic energy and a clear love of the forebears Sodom, Destruction, Kreator, Venom and Bathory, but little by way of great riffs that you want to spin on endlessly. Having long considered the guitar progressions to be crucial to this niche, that's really a deal maker or breaker where I'm concerned, and unfortunately, Under the Sign of the Moon is not a whole lot better at their conception.

There are clearly strong points to the band, not the least of which are the cool logo, nostalgic and colorful cover image, and the enormous production of the record. Carnivore's vocals go for more of an expansive, death metal growl over the filthy speed/thrash metal of the guitars, and it does create this ominous, spacey sensation which I could appreciate. The construction of the riffs is basically pure dirt derived from the first few Venom records and them tampered with a bit of Bathory's s/t debut, Sodom's In the Sign of Evil and perhaps a pinch of Motörhead's robust simplicity and driving, distorted bass tone. Every now and then, like in "Obscure Evil" they will tear out this proto Teutonic death/thrash sequence, and a bit of Hellhammer groove, but even at these moments the patterns are rather predictable and wouldn't seem all that menacing or evil without the massive, raw tones in which the songs are recorded. Cruel Force is not a one trick pony, though, so you'll hear some variation in the slower strut that opens "Chants of Mayhem" or the more atmospheric, heavy metal finale "The Gallows Prayer".

In the end, this is just another case of a band doing just about everything right to appeal to their target audience, and yet not entirely following through with the songs I want to headbang over for years to come. I found myself getting into this only a margin more than the first album, but not nearly so much as other black/thrash hybrids like Nocturnal's Arrival of the Carnivore, Witchtrap's Sorceress Bitch or Aura Noir's cult recordings Black Thrash Attack or Deep Tracts of Hell. However, if you're a total sucker for this sincere, archaic flavor and often find yourself perusing the Hell's Headbanger catalog then you should by all means at least give this a run through. Not as catchy as it looks, but a fairly honest take on the beloved bastardization of these two styles.

Posted by autothrall at 8:27 AM