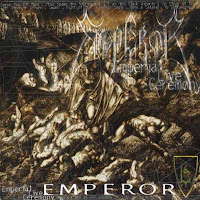 Having had the opportunity to experience their live devastation on their first proper US tour, I can honestly attest that Emperor was one of the best black metal gigs I've personally witnessed. Even the material from Anthems to the Welkin at Dusk and IX Equilibrium, albums that I don't revere nearly as much as many of their other fans, seemed to take on a new life in the stage setting, dispensing with the sterility I've often related to their studio incarnations. The Emperial Live Ceremony package, which was recorded at a London gig in 1999, is a pretty honest and tight sounding representation of such an experience, and will probably best suit those many followers likely never had the chance to check them out due to age or location restrictions during the Norwegians' prime in popularity.

This was released in VHS, DVD and CD format, the last of which is what I'm covering here. The set list is pretty much what I remember from their tour, opening with some ambiance and then "Curse You All Men!". The whole set is about 49 minutes long, and the sound, while not perfect, very well captures the drumming, guitars and vocals. Trym is his usual, living storm-self while the guitars feel punchy, punctual and every wild thread of lead resonates over the denser and vicious substrate of the recording. I admit I can't really make out so much of the base, not that it has ever been the most important ingredient in their mixture, and the synths do seem a little lost in the shuffle, but nonetheless Emperial Live Ceremony captures the band's proficiency like few live albums of its sort are able to for their respective artists. All of that clinical, studio efficiency that so many worshiped (or feared out of envy) is presented in the flesh, and the shifts from soaring, clean vocals to Ihsahn's trademark rasp are seamless.

As for the set-list selected, this heavily favors the more recent pair of albums. "Curse You All Men!", "An Elegy of Icaros" and "Sworn" are present from IX Equilibrium, and Anthems is represented with "Thus Spake the Nightspirit", "With Strength I Burn", "Ye Entrancemperium". I can imagine at the time I was rather upset by this, but all of these are given excellent showings here, in particular "Sworn" and "Thus Spake..." which sound superb. For earlier fare, they've of course included "I Am the Black Wizards" and "Inno A Satana" off In the Nightside Eclipse and Night of the Graveless Souls from their s/t EP, and honestly this stuff is just as good if not better than the newer material. I can't recall the exact set list from the Palladium, but I believe they might have also played a few other IX Equilibrium tracks, or varied them.

Regardless, Emperial Live Ceremony accomplishes what it seeks to and justifies its existence, a clean and snappy performance. Candlelight and the band were wise in waiting a few years to issue a live performance as product, one of those rare cases where it isn't rushed out the door or shat forth with a bunch of others like Iron Maiden has been guilty of in the past. In fact, this is one of the more solid black metal live recordings I own, even if part of me would have wished for more of the old school material.