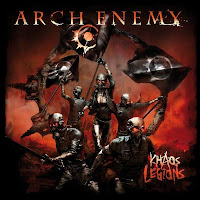 Geeky spelling of its title aside, what first strikes me as absurd about this latest Arch Enemy album is the flag waving comic book appeal of its cover image. One gas masked lass surrounded by four others in some scene out of Killzone, waving their banners amidst some post apocalyptic wasteland. Naturally, this infers some manner of pride or conquest, which I'm assuming the band meant to enforce with their music and lyrics here. Let's face it, high visibility and appeal to 13 year olds and poseurs notwithstanding, this storied Swedish/English collaboration has not been on a roll these past few years. Personally, I've found that their best days are long behind them, peaking out on Stigmata and Burning Bridges ('98-99) when Johan Liiva was in the band, but at least early Angela Gossow era albums like Wages of Sin and Anthems of Rebellion had a handful of decent tracks on them. Not so for the ensuing Doomsday Machine or Rise of the Tyrant, and they REALLY hit a low with The Root of All Evil comp in 2009, a re-recording of cuts from the first three albums, with Gossow's vocals replacing Liiva, wholly unwelcome and unwarranted by any but the most tasteless and impressionable fan girls and khaos bros.

So then, how does their 8th original full-length Khaos Legions measure up? A 180 degree shift unto past glories? A competent and well executed foray into new terrain? To no real surprise or dismay, the answer would be a resounding 'neither'. This is nothing more than refurbished, vapid claptrap. Uninspired, recycled ideas performed with sterility for a Century Media paycheck, offal and fodder for the inevitable package tours with other high flight, overrated video rotators who bear the banner for 'extreme metal', when there is nothing whatsoever extreme involved. Really, though, that's not the main issue here. I wouldn't give two shits if Arch Enemy released a pop album the likes of Justin Bieber, if the music were not so predictably tired, cliche and ultimately a useless stain on the band's legacy which makes even the prior Rise of the Tyrant glow by any comparison. Khaos Legion might occasionally spew forth some half-baked, decent idea, or a riff worthy of the considerable talents of Michael and Christopher Amott, but in general it's as flat and exhausting as they come in the melodic death niche.

First and foremost would be the vocals. Now, I've never really gotten into Angela Gossow's style in the past, and consider her a lousy replacement for Liiva. It's not a gender thing, believe me. She just seems so dry and inauthentic, using and layering a Carcass like sneer with virtually no emotional or dynamic range, and she somehow manages to sound both bored AND boring on this phoned in lump of polished plastic. I simply cannot bear her attempts to sound 'menacing' and/or 'dark' when singing such cliche lyrics as the chorus to "Cult of Chaos": 'There are many ways to die, but only one way to live. Let the cult of chaos reign, be as free as you can be!' or "No Gods, No Master": 'I am who I am. Take it or leave it. A rebel at heart'. This entire album plays out like some motivational self-help recording set to mundane metal music. A 'metal' album for folks who purchase the most generic, cliche-ridden greeting cards for birthdays and holidays. They'll occasionally toss in a little something extra to the mix, like the shrill backing vocal of "Through the Eyes of a Raven" or Angela's sparse but awkward black metal snarl, but nothing can save how bland this all comes across.

I mean, really... "Thorns in My Flesh"? 'No more chains in my flesh! No more chains hold me down! I control my destiny!' It's two thousand fucking eleven. How about showcasing even an iota of creativity or poetic/prose sensibility? Hell, hire someone to do it for you. There are Pink songs deeper than this shit. But you know something? I might even be motivated to forgive or to participate in such inanity were the music itself not so banal. There are approximately two good riffs on the album. One is the Metallica-like speed/thrash frenzy in the verse of "Cult of Chaos", and the other the even more hyper shredding, escalated velocity of "Vengeance is Mine". Mind you, these are the 10th and 13th tracks, respectively, so you've got to wait a long time before anything of import happens, and even then, these songs contain their own share of bland power/thrash guitar progressions which sound like hand-me-downs from Accept, Judas Priest, or solo albums from their front men U.D.O. or Halford. For example, one of the riffs in "Under Black Flags We March" sounds like it was half-stolen from "Painkiller", and some of the lines in "Secrets "sound like knockoffs from late 80s King Diamond grooves.

Arch Enemy will occasionally surge into some mediocre death metal progressions in "Cruelty Without Beauty" or "Through the Eyes of a Raven", but it almost feels hammy and jarring next to the rest of the material. Wimpy transitions to cleaner guitars feel forced ("Cult..." again), and the leads throughout the album are crafted into these dramatic, limp wristed soap opera melodies. Such predictable, friendly patterns that Mister Rogers might like to whistle them to frightened neighborhood children. Not a single lead here stands out, stunning when this was such a strong component of the band back in the late 90s. What's worse, the album is 54 minutes and 14 tracks long (16 if you've got the Japanese bonus material), when it can't even assemble one or two tunes that feel suitably consistent, complete and engaging. Remember when they were writing 8-9 good songs on a CD with very little filler? Apparently they've decided to invert that practice.

I have no automatic or absolute aversion to an album which features a sterile, pop production in accordance with a more 'modern' or polished evolution of the melodic death genre. Soilwork's Natural Born Chaos and Dark Tranquillity's Damage Done are two examples that leap to memory, but they both have what this doesn't: fantastic songs. Authentic, enthusiastic energy balanced against stirring fits of sadness, in both the lyrics and melodies. A hint of creativity, or of the unexpected. Khaos Legions is an almost incessant misuse of a group of talented musicians. Sharlee D'Angelo and Daniel Erlandsson provide such an uninspired rhythm section here that you could replace them with almost anyone else and not notice the difference. The plasticity of the production leeches almost all the Amott riffing of its edge, but in truth, they weren't doing an admirable job of it anyway, and in the end this is their most underwhelming, underachievement to date. It's past time to pack it in. No wonder they're all wearing the gas masks: this stinks.