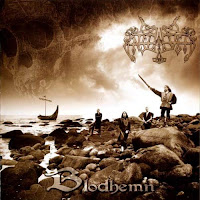 Perhaps more than any other in Enslaved's extensive back catalog, Blodhemn is the album most intent on slapping the listeners in the face and making them its bitch. Some no doubt consider it a stylistic regression from where the Norwegians were headed with the prior record Eld, and there are certainly grounds for such an argument, as the primary motif here is the black metal genre from which the band carved out its name. Sure, there are a few folkish nuances here, like the clean vocals, given a stronger and more somber presence than the previous outing, and a touch of prog in the searing synth opener "Audhumla; Birth of the Worlds", but for almost 40 minutes, the quartet is quite content smack your jaw left and right, heavy handed hammerblows that remind the audience that this is a metal record.

Some fraction of this impetus might stem from the fact that Enslaved hired on a few new faces for this album, in Dirge Rep and Roy Kronheim. Rep is an extremely hard hitter, a fact he made clear on the great Gehenna album Malice, and it would almost seem a waste if Grutle and Ivar were to use him at less than full potential. Naturally, this means a blast-fest, and a number of the songs here thunder forth like a sea storm on fast-forward, though never mindless or excessively repetitious, to their credit. Another change here is in the guitar tone. These are louder, and far more full-bodied riffs than any of the previous albums, and what little synthesizer is used is relegated to the backdrop. Blodhemn is all about Ivar and Roy's blazing aggression, and yet there is often a particular lightness and dynamic strength to the fixation of notes which was clearly not present on any of the earlier full-lengths. The leads were probably the most accessible and hard rock influenced to date, listen in particular to the bridge of "Brsinghamen" for a firm example.

A few of these are definitely among my favorite Enslaved tracks, at least when it comes to their more volatile material outside of Frost. "Urtical Gods" is fucking lethal, alternating corpulent and punk-ish chords with intricate, lightning grooves in the verse that give it a hyper, blackened thrash atmosphere which is enough to peel the paint off any enemy vessel. And then there is the aforementioned "Brsinghamen", with these dense and melodic chord progressions that create a truly, epic momentum. Both of these are quite short, to their credit, and in fact most of the songs are (similar to Frost), so it's essentially an antithesis to Vikingligr Veldi or "793 (Slaget om Lindisfarne)". Not a problem for me, since this selection of songs seems utterly trimmed of any unwelcome fat that would no-doubt prove a hollow attempt at bloated grandeur.

In general, though, there are a few here which are simply catchier than others. For instance, "Urtical Gods" is more savage and memorable than "I Lenker Til Ragnarok" or "Blodhemn" itself, even if those are both still consistent within themselves. Perhaps the most eclectic piece comes in the form of the closer "Suttungs Mjod (Suttung's Mead)", which features a lot of Grutle's clean vocals layered in a yawning, remorseful and engaging sludge towards the finale. The production is frankly monolithic, especially in the vocals and guitars, the former had never before seemed quite this loud, and even the rasps take on an additional boldness over the tidal surge of the axe patterns. In fact, it's probably the most massive studio sound the band would inhabit until Axioma Ethica Odini, 12 years later. Those who favor the band's more progressive leanings in the 21st century will probably find Blodhemn to be one of the least interesting Enslaved efforts overall, and I can't deny that there is a lot less range to the writing, but that doesn't hold it back from some occasional ass kicking, and in this it almost feels unique among its studio siblings.