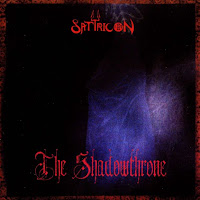 It's a curious twist of fate that Satyricon's sophomore, in its quest to come off as a more cohesive effort than the album it closely trails, ends up the inferior of the pair. Not that The Shadowthrone is by any means a reproachable attempt at maturation, just that the flow of riffing here seemed inherently predictable even when there were so few bands of this sort in the field, when second wave black metal was still a relatively novel undertaking. Gone might be the juvenile cover art, but its minimalist, oblique replacement is none the better. Gone might be the somewhat disjointed songwriting of the debut, but this more consistent material is hardly all the rage. 1994 was not to be the year of Satyricon, not even with two full-lengths, as the masterworks of Emperor and Darkthrone, and strong releases from Burzum, Gorgoroth and Enslaved would seem to preclude that possibility...

That macro-reality aside, however, The Shadowthrone is essentially a good album, just not one that can stack up song for song with its nearest siblings Dark Medieval Times or Nemesis Divina. As I hinted, the album is quite consistent in its pacing and structure. Where there were moments on the debut that felt hammy and slapped together, all the joints here seem better oiled, and the transitions pulled off more smoothly, even if they're not that exciting. Like its predecessor, the band incorporates lush passages of acoustics and a lot of synthesizers to create a grandiose, epic atmosphere, best felt in the bridge of "Woods of Infinity", the closing moments of "The King of the Shadowthrone", or the pompous martial barrage that inaugurates "Dominions of Satyricon". Stand-out riffs are few and far between here, though I favor the mid-paced might prevalent on the middle of the album ("Vikingland", "Dominions...") to the faster, more emptied gait of "In the Mist by the Hills" and "The King of the Shadowthrone".

In fairness, most of the songs have at least one compelling riff. The 8-9 minute duration of tunes like "Hvite Krists Dod" and "In the Mist by the Hills" doesn't create the same one-two combo of "Walk the Path of Sorrow" and "Dark Medieval Times", but they're competent enough, and the symphonic elements are far better matched to the charge of the guitars. Frost turns in a solid foundation, though I wouldn't dub it his most impressive drumming by a long shot. The vocals and lyrics also seem to be more cohesive and enduring than those of the first album, and of course the production is a step beyond in clarity and consistency. But honestly, this just wasn't and never will be one of the better Norwegian black metal albums of its era, and I'd place it alongside Gehenna's Second Spell or Dimmu Borgir's debut For All Tid in terms of lasting impact and total quality. It lacks the screaming, nocturnal ambition of Emperor's opus and the infinite, raw appeal of a Burzum; The Shadowthrone just sort of meanders along, providing a good landscape for the imagination, but few of the ambitious characteristics located elsewhere in Satyricon's scene.