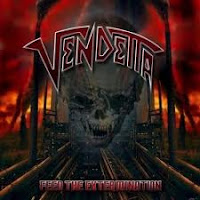 If 2007's comeback album Hate proved a major disappointment for 80s underground thrash addicts, it wasn't due to some overbearing technical flaws or absent effort being placed in its constructions, but only because of its rather plainclothes songwriting that failed to live up to its adventurous, engaging precursor, Brain Damage, 20 years in the past... You generally figure that with old age comes some form of wisdom, but where Vendetta had evolved into this quirky, unforgettable German underdog with that album, Hate was just all too 'normal'. As if any random group of 4-5 guys obsessed with the past hung out on a few weekends, sipped a few beers and played it safe, content with whatever first came to mind. That said, I did not 'hate' (haw haw) the album quite so much as others, and it was at least competent, the new vocalist Mario Vogel trying to stick to the charismatic microphone stylings of his predecessor Daxx.

Unfortunately, Feed the Extermination is more of the same, and in some places, it feels forced, sluggish, and lacking the explosive enthusiasm of Brain Damage or even the raw rapid-fire penetration of their debut Go and Live...Stay and Die. It doesn't help that the disc opens with a boring, circular groove that lapses into vapid, identical mutes and then back again ("Feed the Extermination"). The verse riff is nothing special either, though it at least conjures some of the snappy melodic subtext of their older work, and I really didn't enjoy the various growls and snarls that were placed haphazardly about to express some sort of added emotion. The vocals falter even further in the next track, "Tremendous Brutality", affected and quite silly over yet another arrangement of dime a dozen guitars (the lead sequence is alright). "Cancer" almost seems like a step in the right direction, but for the banal chugging of the verses and more of the semi-annoying whining in the vocals. So we're now 15 minutes deep in a Vendetta album, with nothing really to show for it...

It doesn't get any better. The shuffling, chipper muted rhythms of "Ovulation Bitch"; the boring jump up thrash/grooves of "De-Organ-Izer"; the damp and overinflated power ballad "Abuse". All seem like a band trying to reclaim their 'beat' from the 80s, and wiring in all manner of unneeded influences from the 90s, which were of course the temporary death of the whole genre. You can hear a few similarities to, say, Pantera, even if they're not entirely overt. There is also a fairly lifeless feeling to the production of this record. Bright and clear, perhaps, but the guitars feel pretty flat, the vocals a little too off the hinge, and a lot of guitars moving at a similar, crisp gait. Every now and then you'll hear a half-decent idea, an elevation in the vocals that channels back to the Brain Damage album. Nothing here is all that offensive, just plain and mediocre and unable to express the same level of imagination, or capture the listeners' imaginations, as their cult classics. To be blunt, Feed the Extermination is amply less appealing than even Hate.