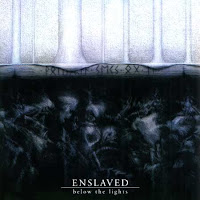 I feel that to endear an album with the term 'Enlightenment' is often to reek of some attempt at pretentious misdirection, and yet there is no other choice I could use to so accurately describe Enslaved's 7th full-player, Below the Lights. From the rune inscribed, unforgettable and glum cover image to the 46 minutes of near impregnable aural genius on parade, this is a band reaching a new vista of potential and simultaneously airbrushing the Norwegians' previous excursions into experimental, progressive territories into a portrait for the ages. Up to its release, I admit to having viewed Enslaved as 'that band who released the stunning Frost and then a bunch of other albums which were gradually scaling in range and quality. But thanks to Below the Lights, my favorite album of 2003, they have become one of the acts I most closely pay attention to, eagerly anticipating each new studio effort and never having been let down since.

This is pretty much a template for how to incorporate varied stylistic influence into a cohesive fusion and vision so seamlessly gelled that I simply cannot imagine it ever fragmented into its scattered roots. Progressive rock of the 70s and 80s, psychedelic overtones, historical and folk cognizance, 'wall of sound' or 'shoegazing' guitar passages, and lying deep at its heart, the same polished and potent black metal rasping and riffing the band introduced in the early 90s. It's not Enslaved's first dance with self-production and engineering, as they had been locked in the DIY mentality for several prior albums, but Below the Lights was clearly the very best the band had managed to its day. An earthen authenticity enriches the dynamic guitars, and much of the disc feels as if it could translate directly into the live setting. And yet, there is nothing 'pop' about it. Just a cloying sadness and darkness to the album worthy of those underground recordings that continue to thrill the core, devoted black metal audience.

The use of subtle orchestration and ambiance is but one of many weapons in play here, and a solemn synthesizer piece is used to inaugurate the opener, "As Fire Swept Clean the Earth". Immediately one can glean a sense for the warmer, jazzier textures being incorporated to the guitar chords, and the swerving complexity of the bass, and yet there are brazen tremolo lines and Grutle rasps so isolated and defiant that they could condense the clouds to darken the sky and induce a steady, cold precipitation. Cleaner vocals and guitars are threaded through the verses, while warbling whammy effects and sprinkles of sporadic lead melodies create an even denser palette of experience. But, as excellent as this piece is, it can't even begin to cover the myriad pleasures that await the listener throughout the album's duration...

I can only point out a few of the highlights, otherwise this would turn into a 10,000 propaganda polemic. "Queen of Night" wins enormous marks for its transition from eerie, Jethro Tull flutes and acoustics to leaden, winding prog-metal grooves, bottom feeding bass ruptures and then it even explodes into this frenetic speed/thrashing sequence around the 4 minute mark. "Ridicula Swarm" begins with another engrossing, layered synthesizer sequence that transforms into a slew of violent riffing redolent of the band's earlier albums, and back again. "The Crossing" opens with a tranquil sensibility, tiny organs in the distance beyond its acoustics; but then flattens you with a massive wall of resilient electric melodies over an almost tribal foundation, Dirge Rep yet again proving that he's more than just a blaster on his swan song (with this band).

In fact, I think this is the best single album that guy has ever performed on, and not just for his technical ability, but contribution to the lyrics and writing. He even joins the band's internal choir for the intro to "Havenless", which is as swaggering, manly and memorable as you're going to get from anything even tangentially related to the Viking/folk metal scene. The musicianship of all parties involved is never less than stunning, but not just for its technical merits, but the impact of each individual sound. Like the kick drum and bass guitar in "A Darker Place" which create an uncanny, pounding sensation, or the constant contrast of Grutle's grisly bark with the cleaner, more refined melodies that surround it. Or the seemingly random electronic tangents fused into various tracks, which once again reflect the band's proggish influences. It should also be noted that the new guitarist here, Ice Dale is perhaps the perfect match for Ivar's playing.

Overall, Below the Lights represents a balance of brilliant ideas and meticulous execution, which I would deem utterly flawless were it not for the final track ("A Darker Place") slightly lagging behind its forebears in eloquence and compulsion. And by slightly, I mean that it's still superior to most of the other tracks in the band's backlog, it just feels like it's marginally shier in ideas and distinction than those leading up to it. But otherwise, this is mandatory material, less jarringly developed than Mardraum and more thematically consistent than Monumension. It looks good, it sounds superb, and it even reads wonderfully! Simple, searing imagery rooted in folklore is well integrated to the emotional shifts in the music. Once more, Enslaved proves that growth need not come at the expense of credibility, and this record remains a hallmark for 'progressive black metal' or whatever sonic niche you deem to place it.