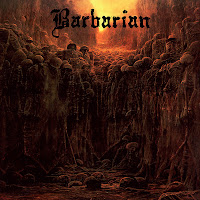 If their eponymous debut is any indicator, Italians Barbarian are enormous fans of the cruder, old school crypto black metal artists like Hellhammer, Celtic Frost, Bathory, and Venom. The riffing patterns they construct are all more or less derived from decades of bands who stand in tribute to such precursors, and yet I found this album remarkably fun all the same, because they simply know how to lay out the primal, pulverizing riffs and let the listener revel in their savage architecture. Not to say that Barbarian is without its flaws, there are a few which hinder it from further greatness, but this record rocks hard enough that it deserves repeated listens from any advocates of that early sound and atmosphere.

The drums are dynamic and flexible, constantly building momentum despite their reluctance to travel outside the slower to mid-paced riffing of their inspirations. The guitar tone steals away the show, with a very organic yet clear tone that seems perfect to pull off live. Though the chord selections in tracks like "Rain of Fire" don't seem inherently complex, they always seem to apply just enough twists and turns into the composition to keep the ears glued, and I love their filthy breaks into prototype speed metal which dwell somewhere between Motörhead and Venom, or their excellent black/thrashing primacy in "Human Pest", which is a wonderful incitement to letting your fists fly into the nearest breakable object, even if that's a human's skull or ribcage. Of the seven tracks here, each is quite well executed, even when they're varying the dynamics up enough to lug along a doomed burden ("Worms") or apply a few little strings of tremolo riffing to increase speed ("The Hammer and the Anvil").

The biggest hangup I have with the album would have to be the vocals. Not because they're bad, because they are in fact superb. The issue is that they're just a margin too soft in the mix, and thus they hover beyond the guitars and tend to sink below the rhythm section. If the knob had been tweaked just a few levels, we would truly be in business, because 'Borys Crossburn' has a great rasp with a lot of character, a bit of bloodied old death metal ghastliness, and it works so well with the riffing style. Alas, they seem too timid at their current volume, and it seems an unfortunate oversight. Nonetheless, Barbarian is still a surprising ass kicking being that it comes from such a group of unknowns. I almost got them confused with another band, Barbarians, who play a Viking/power metal hybrid, but this is something quite different, and something well worth the time and effort to acquire if you're a sucker for that old school grit.