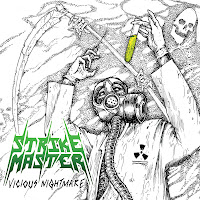 Vicious Nightmare was originally released a few years ago through Marquee Records out of Brazil, but due to its relative obscurity, it's getting a new boost through MetalHit.com. The second full-length from Mexicans Strikemaster, it showcases a pretty firm grasp on various 80s thrash influences, from a number of scenes, and fashions them into a competent, if not exemplary burst of action. Clearly the music has a lot in common with the West Coast sounds of Hirax, Slayer, Sadus, Defiance, Vio-Lence and so forth, but I was also surprised to find that the composition and the tone of the guitars often reminded me of Brazilians Dorsal Atlantica. Vocals are fairly average for the faster US thrash or crossover acts of the 80s, but I also heard some hints at Kreator's Mille Petrozza when Col. Kmu shifts into a more violent, sneering territory.

Unfortunately the album doesn't front load it's better material, so for the first 10-15 minutes it feels like a fairly average journey through 'thrash-standard' riffing and muted sequences, paced by a slower, instrumental intro which was, of course, a common trait on many 80s albums. The first few songs "Black Violence" and "Total Disposal" certainly kick up the energy a notch, but I did not find the riffs here to be particularly exciting. Thick, plunking bass lines serves as support to a muddy, raw and authentic guitar tone that occasionally seems cluttered enough to follow just behind the beat. The chorus parts aren't really all that interesting, think earlier Kreator or Dark Angel but far less memorable, but I will say that once the album arrives at the fifth track, "Metal Fastkill", things take off considerably. Between this, "Rabid Abstraction" and "Prophetic Chemical Death", we're treated to some blistering, catchier riffing that infused early Slayer with a bit of Canadians Razor in their late 80s heyday, and some solid gang shouts.

Another highlight would be "Violent Reinvindication", which features some riffs redolent of San Francisco's Vio-Lence or Texans Devastation, but in general, I found that as the album wore on, it suffered from a bit of repetition in the songwriting. The riffs might all be built up a little differently, but the pacing of almost all the songs is similar, with few pacing breakdowns outside of the intro or the acoustic outro with air raid sirens. Strikemaster plays well enough at this faster gait, but the riffs are never lethal enough to compensate for the lack of much dynamic variation. They seem so focused on recapturing the charging precision of their forebears that they forget to incorporate all those great, catchy chorus sequences and unforgettable riffs that made all those bands stand out to begin with. Thus, while Vicious Nightmare is more than tolerable, a sturdily executed 50 minute exercise in workmanlike retro-thrash with mostly decent lyrics, it never really stands far out from the saturated scene of similar acts, and I found it a little sub-par even next to their 2006 debut Up for the Massacre.