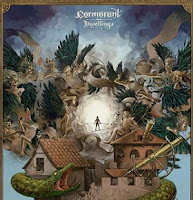 Perhaps the most talked about independent metal release of 2011, or at least the second half of the year, Cormorant's Dwellings is the sophomore effort of a group of talented Californians slowly carving out their sound from a number of influences in the folk, progressive, and melodic black metal spaces. For something self-released, Dwellings is an impressive package, with intriguing artwork, evocative lyrics, fluid and highly proficient musicianship, and most importantly scads of riffs that clearly took some time and effort to conceive. Strangely enough, though, despite it's obvious array of weapons, this is one of those LPs that I must admit to shoving off after only a few spins. Cormorant are emotional, dynamic and pleasant to experience, but I did not find the songs to have nearly the profound impact that so many have raved over.

Perhaps an accurate comparison for the music here would be Opeth threaded with Agalloch melodies and percussive elements redolent of Mastodon's lighter, progressive writing and the swagger and gallantry of Slough Feg. Season with hints of folk metal flavoring and Scandinavian melodic black and death acts like Dissection or Insomnium and then stir. It's a wide range of influences, so many that the coherence of the music is often questionable, but some credit is due to these gentlemen for their flow and pacing in what might otherwise seem a marginally jarring clash of components. Their lyrics explore the worlds of the natural, the social and the personal, with a vivid poetic sensibility, and combined with the vocals that deliver them, comprise my sole favorite aspect of Dwellings. Harsh, charismatic rasps and barks stand out well above the incessant, streaming guitars, but there are also clips of thematic narrative, soothing and clean calms ("Funambulist"), and even some French (?) samples which admittedly seemed a touch pretentious.

The issue I took with the music is simply that the songs are so intent on providing gleaming, catchy melodies at every given second that the maximum emotional potential of the better note progressions is almost constantly trampled upon. They all vary in texture, tempo and length, but I never felt that the riffs all interlocked very well, merely ceding to one another in an endless procession of spent creativity. Peaks and valleys are wrought only through the decisions to swap to acoustic cools and then burst back into either tremolo picked sequences or the majestic canter of mid-paced, ale pounding crescendos reminiscent of Rotting Christ in its late 90s pageantry. The drums remain busy and varied, not unlike a Brann Dailor ("Confusion of Tongues)", and the guitars and bass engage one another in the antithesis of monotony, but several of the songs drift on a bit too long and never hit that climactic stride that you'd expect ("Unearthly Dreamings", "Junta" and "Funambulist" to be exact.)

I felt that the rather raw and authentic production values of the album worked in its favor, and the vocals certainly stand out for their unchecked passion and versatility, much more so than the more guttural/brutal approach they took with their debut Metazoa. Yet in the end, I don't think I could point out a single song here that I felt the urge to cycle through repeatedly. For such dramatic use of melody, there seems a dearth of real tension in how the tracks are written. Riffs follow other riffs, occasionally circling around, but never all that inspiring as a quantified whole. In this way, the band very much recalls Opeth's dysfunction of occasionally conflating too many ideas onto a rhythmic skeleton not up to the task of supporting them, and I often found myself wondering just how much more compelling the album might have been if Cormorant had stuck to just a few per song and then played around with them.

That said, it'd be remiss of me not to mention just how much latent potential lies in the quartet. I might not have found the album quite so enduring and endearing as others have expressed, but there's enough pent up talent here to fuel a half dozen bands, so I expect that once the kinks are worked out we'll be dealing with some truly impressive songsmiths.