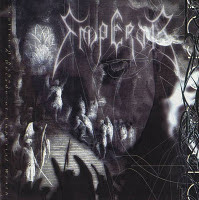 Well, it had to happen sooner or later, a posthumous compilation album for one of Norway's most infamous bands, coming a few years after the (temporary?) closing of their creative gates. That Scattered Ashes: A Decade of Empereal Wrath is viewed as one of the finer collections of its type only speaks volumes of the respect held for Emperor. Sadly, it speaks far more of that than the actual content. Don't get me wrong, Candlelight and Emperor have gone all out to give the fans great cover art, packaging and a metric ton of material. Two discs spanning nearly 2 and a half hours of content, drawn from a large variety of sources. Problem is...most of this band's fans will already have these original works (at least the studio full-lengths) and, thus, much of this is mere redundancy for profit.

So this is another one of those deals where they offer a disc of the more common, album material up front. Disc One jumps around between the four studio albums with few exceptions, not all splayed out in any chronological order, but in an attempt to establish and maintain momentum, like some mix tape you might excitedly make for a friend or girlfriend. The exceptions here would be "Wrath of the Tyrant" and "Thus Spake the Nightspirit", the former being recalled from the band's demo days and the latter from Emperial Live Ceremony. Otherwise, though, you get a good chunk of In the Nightside Eclipse ("The Majesty of the Nightsky", "Cosmic Keys to My Creations and Time", "I Am the Black Wizards", "Inno a Satana") and Anthems to the Welkin at Dusk ("The Loss and Curse of Reverence", "With Strength I Burn" and "Ye Entracemperium"), and a smaller peppering of cuts from their more recent works IX Equilibrium ("Curse You All Men!", "An Elegy of Icaros") and Prometheus ("The Tongue of Fire" and "In the Wordless Chamber").

Nothing wrong with the quality or 'flow' of these selections, but regardless it's a pretty fucking useless start to what might have otherwise been a consistent gathering of rarities. Most of these, of course, make it onto the second disc, which is by far going to be more valuable to the majority of fans who own most of the studio albums, but might not have had access to their demos and EPs. The first segment contains a handful of covers, most of which have appeared elsewhere. For instance, "Aerie Descent" was on the Thorns vs. Emperor split; Bathory's "A Fine Day to Die" and Mercyful Fate's "Gypsy" were on the re-issues of In the Nightside Eclipse. But there are also some compilation tracks here which are scarcer, like their seething rendition of Mayhem's "Funeral Fog" with its splatter-blasting intensity (A Tribute to Mayhem: Originators of the Northern Darkness) or the very best of the bunch, an amazing version of Darkthrone's old school cut "Cromlech" done up in all Emperor's enormous, airy grandeur. I had not heard that before so I was quite thrilled.

Then there's a small sequence of more electronically infused material that include their "I Am" deconstruction from Thorns vs. Emperor, and the hectic Ulver remix of "Sworn" which was on the digipack release of IX Equilibrium, and sounds frankly like crap in this spastic gabber form. The rest of the contents of Scattered Ashes are all EP and demo tracks. As the Shadows Rise (1994) and the non-album tracks off Reverence (1996) are included in their entirety, and the selection is rounded out by "My Empire's Doom" and "Moon Over Kara-Khehr", which are largely the worst produced on the album, the latter being a rehearsal. In all, this is a far more justified use of compilation space, since the target audience might not actually own a bunch of these pieces, though I would maintain that, for the ardent collector, there's nothing new under the sun. But for those people, they'd likely just buy this for the logo on the cover and keep it in the shrink wrap.

Ultimately, Scattered Ashes had nothing to offer me beyond the Darkthrone cover, and that's only because I never bothered to pick up that Moonfog tribute compilation Darkthrone Holy Darkthrone, which I'd much rather do than buy this. This is packaged well, and it includes a boat load of content, but so much of it has been redundant. Pretty, but empty plastic. I'm not sure if Emperor had some other pieces floating around from their later years. Maybe demos for new songs, or stuff that never made it onto Prometheus, or even some experiments, but that would have made for a far more valuable first disc than what we ended up with. Scattered Ashes might be fine for some random n00b just getting into the band, but even then I'd turn he or she to their full-length debut where the band has always been and will always be best experienced. Not shy on content, but in essence, this feels like one of those releases translating to: a safe, guaranteed payday for all involved.