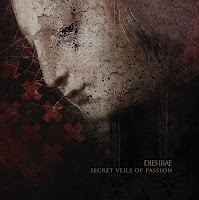 I can't recall if there was ever a Mexican melodic death metal act that floated my boat back in the 90s, but Dies Irae were one of the ones testing their hands at that genre on earlier albums. About a decade into their career, the band decided to disband after their sophomore outing Naive, but have now returned under a relatively new premise. I would still probably, partly label this music melodic death metal, as there are moments in "Want" and other tracks which reflect that genre to a fault, but The Secret Veils of Passion is clearly interested in avoiding such simple categorization, and instead creates a mix of rather eclectic ingredients which prove both its strengths and, sadly, in some instances, its undoing.

The use of the minimal, one-word song titles is curious, not because I haven't seen it before, but because even such prepositions as "To" and "For" are used as titles, or rather homophones for the song's placement in the track order ("To" is "Two", etc). So imagine my confusion when I was first met by a 3 minute, sparse progressive rock sequence in the opener "Want" (or "One"). After this point, a series of pretty bland power chords erupts into the mesh, aligned with some plucky, clean melodies and soaring, accented vocals. A fascinating shift in strategy, but not one that ultimately manifested into a song I'd want to listen through repeatedly, especially for nearly 8 minutes. There are some other behemoths here, like the 10 minute "E7en" and the 9+ "Hate", but these at least seemed more interesting. "E7en" opens with this lush, airy and sad passage which reminds me of some of Anathema's dreamier modern writing, then inevitably explodes into these driving, Katatonia melodies with harsher vocals. "Hate" seems a bit more disoriented, with jilted grooves alternated to flowing, somewhat forgettable melodies, but not bad.

As for the shorter pieces, they're all over the spectrum. "Tree" is a nice, scintillating post-rock piece of brief duration, but the varied vocal harmonies don't quite feel as stirring as the band might have thought. "For" is pretty much straight choppy melodic death metal, returning the Mexicans to their roots, and to be honest it's quite good...the contrast against the softer elements on the album is immediate, and the heavier shit just wins out here. The band even explores a saucy funk/rock on "Sex", as if channeling some aural porn stereotype, while "Fight" is ironically another psychedelic rock number, with a few bluesy licks reminiscent of Pink Floyd. And then there is the weird, narrative interlude "To" and the closer "Night", the latter of which brings back a bit of the more spicy, explosive death metal licks.

It's one thing to manifest such a broad, esoteric climate in your music, but there is something about The Secret Veils of Passion which unfortunately doesn't hold up to scrutiny. It feels far too scattershot, like a heaping of jarring ideas that unfortunately do not gel together even in an ironic sense. Where the band waxes metallic, they seem like a fairly competent trio with a capacity for well reasoned hooks. But too much time is spent here on those other things, which are all lacking in their execution. In the end, it feels as though Dies Irae were trying to craft some spiritual companion to Tiamat's A Deeper Kind of Slumber, only the songs do not come out quite so memorable or revelatory. Who knows, maybe this was just over my head completely. It's not a complete failure of an experiment, but neither was it so enticing.