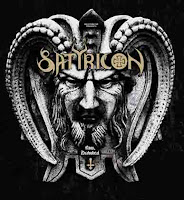 After spending a few years and albums batting around various ideas and directions, Satyricon seemed to have finally settled in on what they were seeking with their sixth full-length Now, Diabolical. This album is the culmination of stripped down black metal aesthetics cast in a rock formula, and it has a drier tone to it than either of its neighbors (Volcano and The Age of Nero). I admit to being apprehensive once I heard that the band signed with Roadrunner records, and then upon seeing the lame rock star video for "K.I.N.G." I was terrified for what had become of this Norse duo. Thankfully, the song itself had a few clever hooks in it, and upon experiencing the album in its entirety, I felt that it was far more cohesive than the two before it. I can also say that Now, Diabolical is a 'grower', which is unusual, since I generally place that trait with albums of some complexity, or at least an impenetrable mix or atmosphere.

No, this is all around accessible from the get-go, sufficiently streamlined for their major label jump, but hypnotic nonetheless, and it helps a lot that the first three tracks are among its best. "Now, Diabolical" itself has a mildly Slayer vibe to it, with some slower thrashing riffs and a mild escalation, though the chorus feels obvious, repetitious (as it will with many of the songs). Then comes "K.I.N.G.", which is played at a steady, mid-pace with this excellent, mesmerizing chord sequence and a traditional rock structure that culminates in a killer groove around 2:20. The vocals here are quite representative of the album: very dry and even monotonous, but the means by which each line of imagery is delivered with an almost laconic amount of effort only adds to the effect. This was a personal hurdle in slowly warming up the music, but nowadays I doubt I would have wanted it any other way.

"The Pentagram Burns" is another track that deserves some mention, as it's got my favorite riffs on the album, in particular the verse itself, given a shining, diabolic radiance. This track goes one further to introduce horns into Satyricon's sound, but here they are used more for a pump up of the guitars in the end. They'll be used again in songs like "The Rite of Our Cross" and the closer "To the Mountains" to greater effect. The duo also experiments more with atmospheric, melodic passages further along the course of the album, like the chorus of "A New Enemy", and acoustics are also implemented through "The Rite of War Cross" and the intro to "Delirium". Probably the best song on the latter half of the album would be the 8 minute monolith "To the Mountains", with a lot of lurching doom riffs, precision double bass, and a well developed escalation towards the sweltering horn-driven climax. I almost wish the band had decided to use the horns for more of the songs, though I doubt they wanted to alienate their audience entirely.

But that's really what it all comes down to: do you mind an established band moving off into new territory? Satyricon had been down this road for years, and I think with Now, Diabolical and the ensuing Age of Nero they've made a damn fine show of it. Sometimes you've got just got to take the music for what it is, and in this case it's very riff-centric, with basic patterns that might not hold an appeal to those seeking endless tremolo streams and blast beats. If the guitars were awful, then it absolutely would not work. And yet they're pretty good licks, at least the best that Satyr had written for going on a decade. Now, Diabolical is a good time. Just try to ignore that damned video...I know I wanted to impale my eyes on a spiked armband after that stinking, narcissistic tattoo party. It couldn't have been any worse if you had Frost sport a pink dress and attending some ladies' high tea idyll.