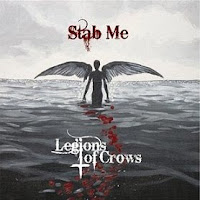 Legions of Crows are not a band I have any prior familiarity with, but what I can say is that they've come up with a rather novel debut that spurns the notion of ascribing to any strict genre. Surely most will recognize it's doom and black metal elements, but the UK duo is clearly not afraid to venture into outside territories, and they offer a marginally distinct take on the thick, copious mud and sludge that often accompanies the messier bands in the doom genre. To be sure, most of the 'black' metal influence on this album comes through the rasped, agonizing vocals, the filthy, grim distortion of the guitar tone, and the programming of the drums. You're not going to hear any epic, symphonic structure or blazing tremolo structures here, as the actual riffing tends towards a painful, sluggish drawl.

At first, I didn't know what the fuck to think. A lot of the material here is culled from their 2009 demo Cacophonous Aural Wickedness, but there are numerous additions here, like the opening organ hymn with its mix of clean choir singing and a rasp. I won't lie, it's pretty funny sounding, and revels in its irreverence, but soon the band lurches into this primal, dissonant sludge riff to inaugurate "Malediction". Crawling, crawling, fucking crawling...but the strange thing is that the band brings BACK some of the hymnal vocals over the droning...and it's the most unexpected and unnerving thing on perhaps the entire album. Other songs are equally quirky: like the old school funeral feel of the keys that accompany the Sabbath doom riff in the following track "Fellating the Lambs", or the strange, start/stop low end riffing the band creates through a lot of songs like "Bullshit Acres". Perhaps the strangest song here is "Defecate", which feels like light hearted piano fair that someone might use to back Celine Dion...injected with a heroin overdose of grimy, doomed filth and sinister, squelching vocals.

It's a crazy album, but not without its riffs. Most of my favorite songs come closer to the latter half, like "Legions of Crows" itself or "Dull Grey". Both are rather bloated, over 8 minutes in length, but the band evinces these potent, pummeling rhythms out of their guitars that feel fresh and memorable. Another choice moment was "Carrion Pond Drove", this ghastly and disgusting spoken word piece over some soft, eerie ambient and crows cawing. I can't say I was a huge supporter of the drums...a live skin basher would add some desperately needed dynamics to the tracks, especially those more swollen ones, but otherwise it's a pretty interesting listen. Think of Electric Wizard or Ramesses if they were less straightforward; more eclectic than psychedelic. Not something you hear every day.