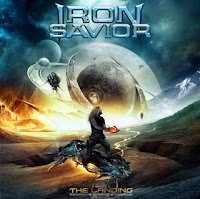 The Landing, while never especially awful or offensive, sadly serves as a grim reminder of German power metal stagnation these past few years. As much as I respect Piet Sielck for all he's done in this scene and his loyalty to the roots and sounds that inspired him, this is yet another in a line of samey sounding records that stretches back to the late 90s, when Iron Savior joined its peers Running Wild, Blind Guardian and Grave Digger as one of the forerunners in that niche of grittier fronted acts that proved ye needn't sound like Rob Halford and Michael Kiske to deliver the goods. Iron Savior peaked on its eponymous debut, and while they've usually mustered a small handful of catchy songs on each subsequent release, I can't help but feel that they've been more or less scrambling and rewriting their sophomore Unification for well over a decade now.

The chorus parts feel much the same, the guitar tone processed to yield the same bite, and of course the subject matter of the lyrics revolves around their namesake space opera. Sielck has gone on about the grand concepts and scope of this saga, but you'd never guess it through the actual lyrics of their albums which are pretty much bonafide 'feel good' German power metal ala Gamma Ray, Helloween and Accept with a slightly futurist bend. Far be it from me to discourage such use of the imagination in metal music, being a total dweeb that intakes more speculative fiction (sci-fi, fantasy, horror, whatever-punk etc) than he drinks water, but anyone with even a remote interest in space opera knows that we've come a LONG fucking way from Close Encounters and Star Wars. Alastair Reynolds, Peter F. Hamilton, Iain M. Banks, Vernor Vinge, Dan Simmons and many others dominate the local brick & mortar bookshelves, brimming with countless ideas in line with the technological expansion of our species.

So you'll have to forgive me if I find the whole 'Iron Savior' arc pedestrian at best, but it's always taken a back seat for me to the music of this band, which this time around, is equally at fault for gliding straight in and out of the ears. Consummate professionals, these guys know how to set up their verses, chorus, bridges and leads with the best of them, but strict structure aside, there are painfully few moments here in which the riffs distinguish themselves. Mid paced rockers like "The Savior", "Hall of the Heroes" and "Heavy Metal Never Dies" all feel as if they've been played out so many times in the past, and while quicker paced anthems like "Starlight" and "Faster Than All" do well to ramp up their intensity and spread some variation through the track list, they're almost all replete of memorable guitar progressions even after repeated listens. Piet himself sounds as solid as any of the prior full-lengths, but despite the man's consistency I just can't shake all the exhausted, cliche lyrical lines which feel as if they were simply paraphrased from past Iron Savior tracks.

So incredibly safe and lazy sounding, which might be excused if the songs themselves were anything to write home about, but they just feel like Unification Part VI. Instead of "Starborn", we've got "Starlight". Instead of songs about traveling here or there via spaceship, we've got songs about traveling there to here via spaceship. And yet, the lyrics paint it all out to be so vague and streamlined with any other random power metal song. Why not get more specific about this grand fiction you've created? Focus in on people, planets, gadgets, cultures. Name them and let us in on the details. Otherwise, what impetus have I to focus my lens in on this particular saga over any other? "R.U. Ready"? "Heavy Metal Never Dies"? The last thing people need is more of this retread self-affirmation metal nonsense. How about using that same imagination you tease us with, instead of dumbing everything down? Help the genre grow, not collapse in on itself like the pathetic caricature this album portrays.