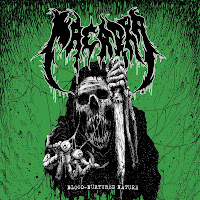 Nostalgia has been the bread and butter of death metal for years now, hundreds of bands deciding to push back against the increasing technical/studio standards that progressive and brutal death have been evolving since the 90s. Believe me, I hear more of these old school cavern-core and Swedeath records that possibly any other sub-genre of metal outside of black, and for every good band in the field, there are a few who aren't. As for Macabra, the collaboration of a Belgian vocalist (Adrien 'Liquifier' Weber) and US illustrator and multi-instrumentalist Mark Riddick, they take this retrospective approach to the extreme, dressing down the production to give it the atmosphere of a bare bones demo, so decidedly old school that in listener I lost complete track of what year I was actually living in...

The press release I had for this album compares it to recent acts like Necros Christos and Grave Miasma, but I'm hearing more of a direct connection to the prototype sounds of bands like Autopsy, Cianide, Asphyx and Death. The guitar tone is incredibly boxy during both the chugging mutes and chords, and the vocals so humble you'd think they were being grunted at you from a few meters away in a rehearsal room. Gutturals and rasps are alternated here to create a claustrophobic, sepulchral environment through which the pangs of saddened dual-melodies thread like the ancient death/doom artisans of yore, but the band goes one step beyond this, including all manner of cheesy choir synthesizers and effects to enrich the campy and suitably horrific atmosphere created through the ridiculous song titles like "Consuming the Fleshly Wax (The Rule of Decomposing Eminence)" and "Thick Slabs of Moribund Fat (Hung on Hooks)", which coincidentally number among my favorites here; and they're not afraid to incorporate an all-out clean, ambient passage as with the intro to "Contribution to Your Dis-elaboration (Sustenance of the Void)".

All of this sounds like some eager band of wretched hi-top sporting longhairs churning out their first demo in the year 1989, thanks to the absolutely polish free allure of the mixing. Don't get me wrong, this is not some muddy sounding slop-fest. The guitars are incredibly clear, the drums clapping, kicking and simplistic, the bass doing little more than hover and plug along the background. When the synthesizers arrive, they add to the live vibe of the recording, since they don't seem to have been mixed to some symphonic gloss. Strangely enough, it works ingeniously well. If the music itself were not so stripped, simple and invigorating, with careful attention paid to each line of melody, each intercession of keyboard, vocal and guitar, Blood-Nurtured Nature might not yield such entertainment. But even if the riffs feel derivative from time to the time, the vocals like a hundred acts to come before, there is something so authentic and fun about this record that it should not be missed by any past-starved maven of the macabre.