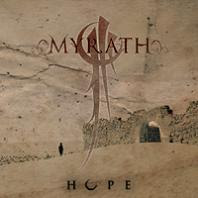 After having my mind blown sufficiently by this Tunisian band's sophomore Desert Call earlier this year, I felt it pertinent to track down their 2007 debut and see what I had been missing. Never before had I been exposed to metal of any sort from this particular country, least of all a band who can trump American favorites like Symphony X and about half of Dream Theater's catalog while fully fusing their own cultural perspective as a native influence in their composition. Hope is not quite so powerful as its successor, but it does mold itself around an impressive center-piece, with a number of other tracks also shining through the din of mediocrity to cement a pleasurable listen for fans of power/progressive hybrids.

The center-piece is of course the 11 + minute "Seven Sins" which dominates the core of the album. Here Myrath calmly develop a mystique through both eerie synthesizers, busy bass and an almost doom metal gone progressive wackjob in the guitars. Keyboardist Elyes Bouchoucha's escalating vocals are superb, almost as if he's mixing a little of James Hetfield's earlier edge in with the more melodic voice, and as the track transitions through each phase, delightful surprises await, like the moody breakdown around 4:30, the power metal surge after the lead around 6:00, or the later piano rock sequence after 7:00. A tasteful integration of both ambition and superb musical quality, it's the most powerful individual track found here. There are other lengthy pieces like "Hope" and the finale "My Inner War", the latter of which is bristling with jazzy funk which later develops into some jarring metallic components.

Of the shorter fare, the intro offers Middle Eastern percussion and synthesizers that immerse the listener directly into the rich history of Myrath's region. The muddy deep end grooving guitar tones of "Last Breath" part for some excellent bass playing and an overall ark that feels like Jorn Lande jamming with Symphony X, albeit with a cooler guitar tone than Michael Romeo's. "Fade Away" is the power ballad, slowly cruising from folk to electric, and while its not a favorite of mine here, it's far from bad. "All My Fears" answers this doldrums with angry gang shouting, impressive shredding and intimate energy, though it too is not one of the better songs. "Confession" has its highs and lows, with muddy chugging guitars, Bouchoucha impressive as he conjures a little angst, but the most impressive moments arriving in the Dream Theater-like jam that steals away the song in the bridge.

No, Hope did not leave me salivating quite so much as the follow-up, but clearly its impressive enough in its own right to satisfy progressive metal fans. You can hear the band developing their fusion of ethnic melody and more contemporary tactics that will thrust them into the top tier of this genre's acts, but the songs just don't have the beautiful power of Desert Call. The mix is pristine, the musicianship tight and fluent, and "Seven Sins" alone is worth giving the album a listen, but if you're new to the band I feel you might be better served by the sophomore.